In the summer of 2019 Arts Etobicoke, Mural Routes, the STEPS Initiative, and Womxn Paint presented Augmented Representations: The North Etobicoke Mural Project. The project was a series of workshops and training with local community and artists, leading to a summer-long, collaborative mural project in North Etobicoke. This project was produced and created in partnership with the City of Toronto and StreetARToronto (StART) and is a Signature project of the Cultural Hotspot. Augmented Representations is grateful for the support from Project Sponsor Toronto Pearson International Airport and Paint Sponsor Dulux Canada.

The mural series blends together current and historic narratives to embody the voices of community members. Artists and participants weave together images inspired by Indigenous narratives, personal experiences of local residents, and the landscape of the Humber River into a collection of meaningful and vibrant visuals.

Located along the retaining walls of Finch Avenue between Islington and Kipling. The project ran from May to July 2019 and had its grand unveiling on July 28, 2019.

Production Assistants: Rysia Andrade and Sings to the Forest

The series of North Etobicoke murals has incorporated a digital augmentation component, providing a digital layer of storytelling and background information that users can interact with on their Android or iOS devices. Developed by Seneca 360, the augmented reality component will allow viewers to engage with the work to discover information about the project and the artists involved.

Main image of community COLLABORATIONS by mural routes, images below by partner organizations 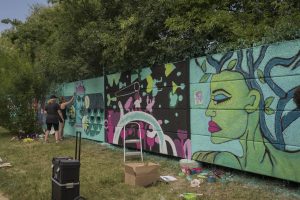 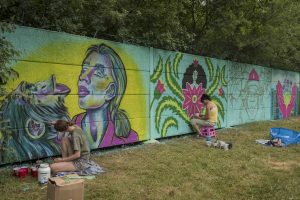 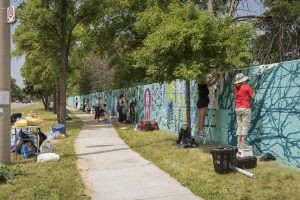 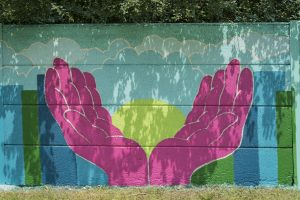 Location: 11 Farr Ave Etobicoke, ON M9V 2A5 | Get Directions