In collaboration with the Chelsea Hotel and Downtown Yonge BIA, this mural showcases Yonge Street’s theatre scene over the past century. The wall stretches 145-feet long with images of theatres, props and actors depicted in horizontal panels to look like a film strip. Life-size patrons and children line the pedestrian sidewalk, while vintage cars are painted on on the street side. 4 panels include realistic facades of 4 different theatres that were painted in black and white to give a timeless feel that adds to the historical theme. Colourful beams of light tie the entire mural together as they illuminate from old projectors, stage lights and headlights. The inside of the ramp includes the familiar underground scene from the popular, Phantom of the Opera. A 1960s VW Beetle drives down the ramp with small bee icons rotating on the hubcaps, identifying the new beehives at the hotel. An elaborate chandelier, candles and the car’s headlights direct traffic and shine light into the parking garage. A painted marquee welcomes guests as though they’re entering a theatre. “Park. Check-in. Action!” 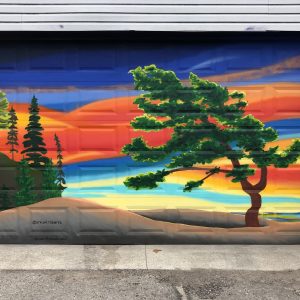 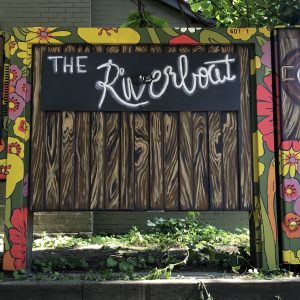 Ode to ‘The Riverboat’