Initiated by the Wexford Heights BIA, this mural commemorates the 10-year anniversary of the annual summer Taste of Lawrence festival. Mural Routes animated a community arts booth at the festival in early summer, taking photos of scenes from the event and asking community members for input on the mural. This highly detailed piece was designed and led by youth artist leaders Tara Dorey and Jenn Moyer, with youth from our summer mentoring program.

Spanning 5 separate walls, this mural shows a variety of scenes from the festival that celebrates the energy, culture and people of the Wexford Heights neighbourhood. 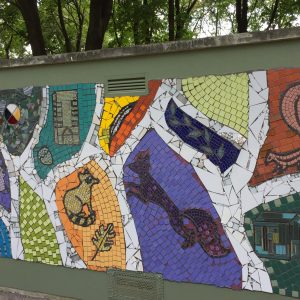