Empire Collision celebrated their 50th anniversary with this mural showing highlights from the last 50 years of Edmonton. The small business wanted to give back to Edmonton by showcasing a mural about the city. The mural unveiling served as a 50th anniversary commemoration event during which a 1964 mustang was donated to the Kid’s Cottage charity with a raffle.
The mural transitions through 50 years in Edmonton from 1964 to 2014, moving from the past on the left forward to the present on the right. This timeline also matched the 50th anniversary of the Ford Mustang which was incorporated into the mural.
“50 Years and Counting” is 120 feet long by 12 feet high and was painted in acrylic on aluminum composite panels. 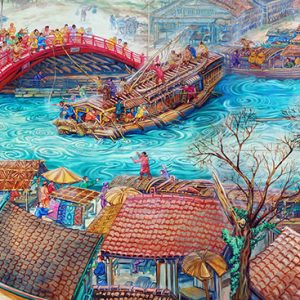 Along the River During the Qingming Festival 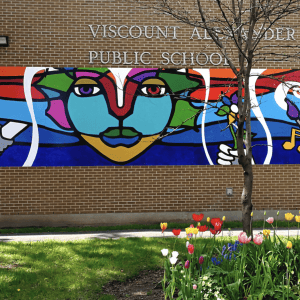