NEWS – Mural Unveiling: Join Sobeys and the artist for a mural unveiling event Thursday, September 26 at 12noon, with an artist talk at 12:30pm. Meet at the mural – 2040 Queen St E, Toronto.

Toronto, CA, 2019 – Mural Routes and Foodland are partnering on plans to produce a new mural in The Beaches. A selection committee of representatives from both organizations, The Beach Village BIA, and the Foodland store have chosen local artist John Kuna to design and create the new mural.

John Kuna is a recognized artist and muralist for over 20 years, creating over 40 works and murals across Canada, the United States and Europe. His first studio, where he began to paint murals, was located on Queen St East in Toronto, and The Beaches area was where he would join fellow artists to practice landscape painting of the scenery, or to simply walk to the board walk and enjoy the sights and sounds.

The new mural will replace the deteriorating mural on the east-facing wall of the Foodland store located at 2040 Queen Street East, which was removed in 2018. The initial mural was created by artist Rudolf Stussi, with assistance from his sons Errol and Max Stüssi, as Rudolph was also running the Fine Arts Studio at Centennial College at the time. The design, featuring the essential Beach with a focus on the jazz festival, had won the BIA competition under the direction of Deborah Etsten, and was completed over a three-month period in the fall of 2007 on the wall of what was then the IGA.

Foodland has been a proud part of The Beaches community for over a decade. This project aims to produce a new mural that celebrates Foodland’s commitment to the local community and the unique characteristics of The Beaches. Community consultation for the project is being managed by Mural Routes with support from The Beach Village BIA.

In February, a public Call for Artists was sent out, as well as an online community survey to gain an understanding of the artistic style that Beaches residents envision for the new mural. In March, the selection committee assessed artist applications and styles based on the community survey feedback. Once an artist was selected, local community members were invited to share further feedback about the mural design proposal.

Members of The Beaches community could get involved by attending a Public Art themed neighbourhood Jane’s Walk, on Sunday May 5th, and a community consultation event at The Beaches library on Monday, May 13th, 2019.

This design uses a realistic scenic approach. It references the Jazz Festival with the couple dancing in front of the Kew Gardens Gazebo where concerts are held, and the active lifestyle of residents and visitors who enjoy the beach, board walk and surrounding parks – from volleyball to dog walks, to picnics and ice cream breaks. Other landmarks are the Leuty Lifeguard Station and the boardwalk with a view of the Toronto skyline. Visitors to the mural can playfully pose and interact with the dandelion in the bottom-left of the mural, with its seeds blowing in the wind before transforming into the Victoria Day fireworks display over Ashbridges Bay.

Updates and Ways to Get Involved with the Project: 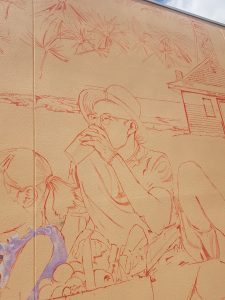 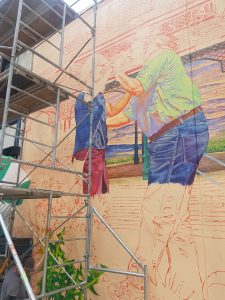 About the Mural Partners

Proudly Canadian, with headquarters in Stellarton, Nova Scotia, Sobeys has been serving the food shopping needs of Canadians since 1907. A wholly-owned subsidiary of Empire Company Limited (TSX: EMP.A), Sobeys owns or franchises approximately 1,500 stores in all 10 provinces under retail banners that include Sobeys, Safeway, IGA, Foodland, FreshCo, Thrifty Foods, Farm Boy and Lawton’s Drug Stores as well as more than 350 retail fuel locations. Sobeys, its franchisees, and affiliates employ more than 120,000 people. More information on Sobeys Inc. can be found at www.sobeyscorporate.com.

Mural Routes is the only not-for-profit art service organization in Canada dedicated to the
creation, development, and promotion of public wall art. Their vision is to inspire the creation of extraordinary public wall art that serves as a catalyst for community building. Mural Routes creates, promotes, educates, advises and links artists, organizations and others that are interested in the development of wall art.