One of Toronto’s biggest landmarks, the “Rainbow Tunnel” was first produced by B.C. Johnson in 1971 on the east side of the Don Valley Parkway, approaching Lawrence Avenue East. He decided to paint it in memory of a friend who had passed a year prior in an unfortunate incident involving a fiery crash on the DVP. For Johnson, this was a memorial that marked the one-year anniversary of his friend’s passing.

As the years passed, Johnson said the City would come back and paint over it with greys. However, this never stopped Johnson from returning with paint and brushes to do it again. Over time, the beautiful artwork was neglected and vandalised several times until the city handed over its care to Mural Routes.

In October of 2012, the restoration of the tunnel began and that is when Artist’s Rob Matejka and Anthony DeLacruz cleaned, scraped, primed and repainted the (South-facing) tunnel entrance so that this much-loved piece of Toronto’s street art history remains strong and able to cheer up the many tired commuters on their dreary ride from the city. Phase one — restoring the rainbow — started Oct. 9 and took Rob Matejka and Anthony DeLacruz six days to complete.

With funding provided by the City of Toronto Parks, Forestry and Recreation Department, who recognized the power of such an icon and the beautification of city trails, Mural Routes took on the rainbow revamp as well as a mural project to paint the inside and North end of the tunnel, where an additional rainbow was added.The project took place in Summer of 2013, involving local youth from nearby Flemingdon Neighbourhood Services.

Participants in Mural Routes’ Step x Step: Introduction to Mural Arts and Leadership Training in Mural Making programs were part of the design and painting process for the inside of the tunnel. Designer and artist Rob Matejka, 2 lead artists, 5 local Youth from Flemingdon Neighbourhood Services, and many wonderful volunteers worked to create a Rainbow-themed mural inside the 65+ft tunnel, replacing the darkness filled with graffiti and vandalism.. The new artwork can be described as a brightly coloured nature and cityscape that depicts couples, families, dog walkers and joggers in changing seasons. It is meant to be a “new, magical passageway” for those who use the East Don Trail.

Mural Routes has since then taken responsibility for keeping the Rainbow Tunnel in good condition with the support from the City of Toronto. Although tagging has not stopped, the community has come together to not only inform Mural Routes of the graffiti and vandalism, but also support its restoration via donations.

You can contribute to the Rainbow Tunnel’s ongoing maintenance here.

Watch a video about the Rainbow Tunnel here. 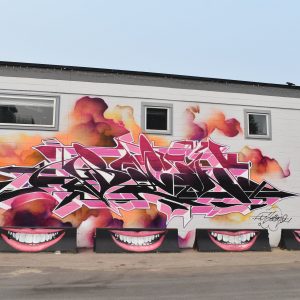 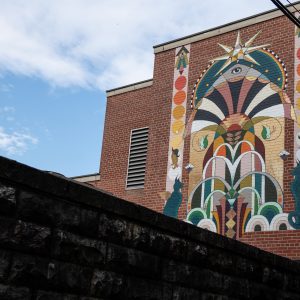 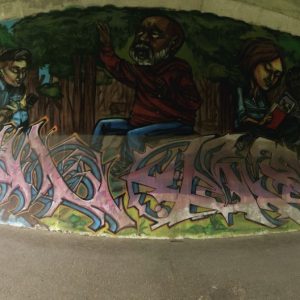