This massive mural is one of our most remarkable. It embodies the diverse cultures
represented by the citizens of Vernon. Each individual in this mural was specifically
selected because he or she was one of the earliest pioneers for his or her culture in
this region. From left to right, the cultures represented are Chinese, Eastern
European, Scandinavian, English, Aboriginal, East Indian, Japanese and Belgian. The
Canadian flag stands behind them as a symbol of unity. The cloth at the bottom of
the mural represents social fabric and how it is sewn together.
On the far left are Mr. and Mrs. Ng Shu Kwong. Mr Kwong, who lived from 1866-1929,
panned gold at Cherry Creek, worked at S.C. Smith Lumber and then opened Kwong
Hing Lung General Store. Many of these new settlers were immigrants from around
the world. Charles Vernon, Forbes Vernon, Price Ellison were from England and
Lord and Lady Aberdeen from Scotland, were just some of the immigrants to this
area who became very well known. Their names live on in places like Ellison Park,
or on Aberdeen Rd. Lord and Lady Aberdeen started an orchard in the Okanagan.
Lord Aberdeen became the Governor General in 1893 and in the same year Lady
Aberdeen was elected the President of the International Council of Women. Many
Belgian families purchased land near Swan Lake. They built their own houses and
furnished them with Belgian furniture and Tapestries
The man in the top hat in the middle of the mural is Vernon’s 1st mayor W.F
Cameron. This mural is completed by a picture of the former Prime Minister Pierre
Trudeau. He is featured here on the far right side of the mural. Trudeau passed
away during the construction of this mural in 2000, and he was added to the mural
as a tribute to his legacy in Canada. 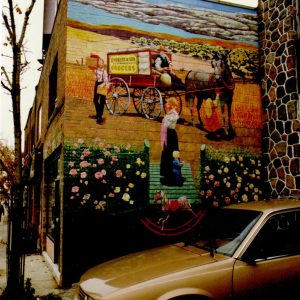 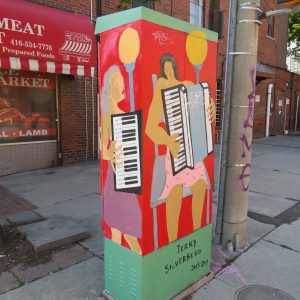