This mural was created by Ric Gendron and assistants in 2022 on the side of Pharmasave Nelson.

“Ric Gendron is a “paint slinger” who creates expressive artworks that blend traditional Indigenous imagery with bold colors fields. As a member of the Arrow Lakes Band (Sinixt), he creates expressionist, strikingly colorful images that chronicle his experience, memory, history, journeys and identity. Gendron studied art at Cornish College of the Arts, the Eastern Washington University and in 1983 received his art degree from Spokane Falls Community College.
His paintings and prints are grounded in the work of Francis Bacon, Fritz Scholder, T.C Cannon and Harry Fonseca, and sources as diverse as Jean-Michel Basquiat, Hollywood’s Western films, and 1950s and ‘60s TV cartoons. Deeply influenced by the Beat poets, and by Kerouac, Ferlinghetti, Hunter S. Thompson and other prominent West Coast writers of the 1960s and ‘70s, his work also encompasses the rhythms and strategies of traditional Indigenous music and blues, country, folk, and rock and roll music. His imaginative source materials are rooted in the conflicts and challenges of living in different worlds, and the themes of contemporary experiences and Indigenous identity.”

In an interview about the mural, Ric said:
“Well, of course, we started with the river. It’s always the salmon with the Columbia River people, you know, that’s what it’s all about. We have ceremonies, dances, prayers, and things that go along with the season. With me, I represent the Upper Columbia on my Sn̓ ʕaýckstx (Sinixt) side and then I represent the Lower Columbia on my mom’s side, she was Umatilla.
I wanted the throw in a little representation of where I live, Nespelem Valley, on the Colville Reservation. The land over there is different than it is on the Sn̓ ʕaýckstx (Sinixt) land. It’s aired, with sagebrush, coyotes, ticks, and rattlesnakes. I wanted to represent my home there. Then, the mountains are very abstract, and they represent this area. For the sky, my biggest painting influence in the world has always been Vincent Van Gogh, and so I wanted to create a version of Starry Night. I can’t take credit for very much of that part of the mural, I got the ball rolling, and then I turned it over to my amazing crew and they just went for it. I love what they came up with.
The three dark arches represent our kʷiĺstń (our sweat lodges). I’ve been attending sweat lodges for going on 54 years. Wherever I go, I always look for a sweat lodge. Then we have the figures within the sweat lodges. The centre of the universe is sńḱlip, Coyote. The Creator showed the sweat lodge to Coyote, and Coyote is the one that brought it to people. And so, he’s always in the centre. To the left of him, there’s two figures in that sweat lodge that represent the sky world. The two ravens are something that’s very personal to me. I even wear the tattoos and things like that. The sweat lodge on the right is very abstract, it almost looks South-Western but actually, it’s not, it represents the pictographs that are found all along the Columbia River, from up here, all the way down to the Pacific Ocean. The ones that I’ve seen are very stoic and stiff, they stand straight up, but I decided that I wanted to make these livelier and have them dancing, like they are celebrating, so I added a little movement in there. The people that helped on those images did an awesome job; I just love it.
And then, everything comes from Earth, so that’s the vegetation, the plants, that run all along the bottom.” 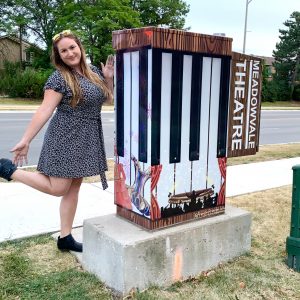