The transformation of the west side of Underpass Park will soon be complete! Seventeen artists have been hard at work throughout August, animating thirteen pillars beneath Eastern Ave, Toronto.

This project, entitled Multipli’city, is managed by Mural Routes and is part of the StreetARToronto Partnership Program in collaboration with the Corktown Residents and Business Association, the City of Toronto Parks Department, and Relay 2017 – Friends of the PanAm Path.

While the artists’ designs are diverse, they are tied together by the theme of multiplicity, a theme intended to remind us that our diverse people are the real pillars of Canada.

Read more about the project here, and meet the talented, diverse artists of Multipli’city below: 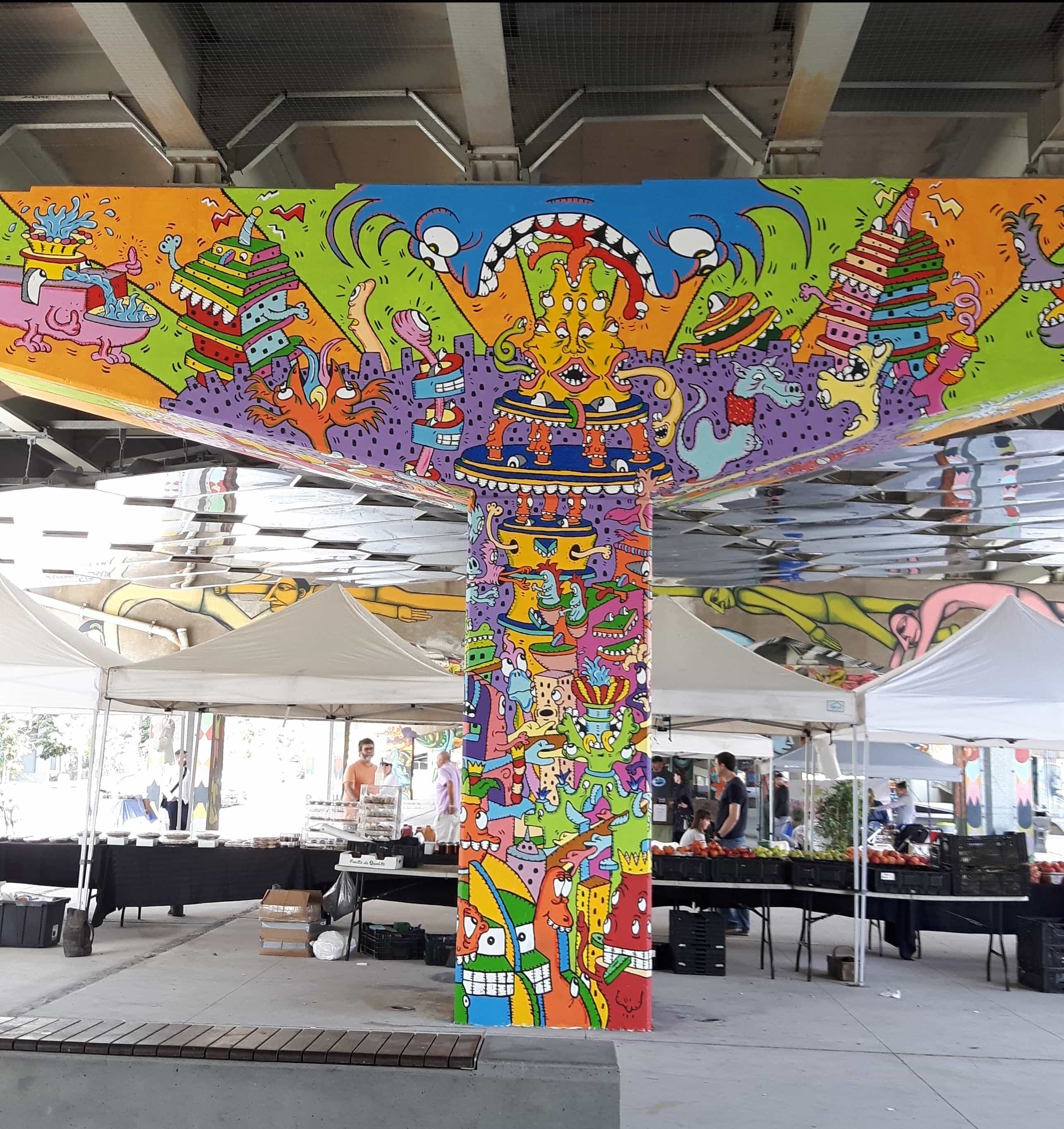 Toronto’s streets are Alex ‘Runt’ Currie’s canvas. His signature style can cause anyone walking by to stop in their tracks. For three decades, Runt has used surrealistic, colourful creatures inspired by the children’s book author Dr. Seuss, Ray Harryhausen, and King Kong to bring a new aesthetic to downtown communities. He built a name for himself with projects such as painting Lee’s Palace three times, hosting his own gallery shows, creating a special edition can for Pabst Blue Ribbon, having a feature-length documentary made about him and even creating the 2015 Toronto TTC ride guide. Runt’s mischievous creatures are a highlight for any Torontonian walking through Kensington Market, Little India or along Bloor Street . There are too many streets throughout Toronto to list that are marked by his twisted techniques. His work is the focus of the feature film RUNT. 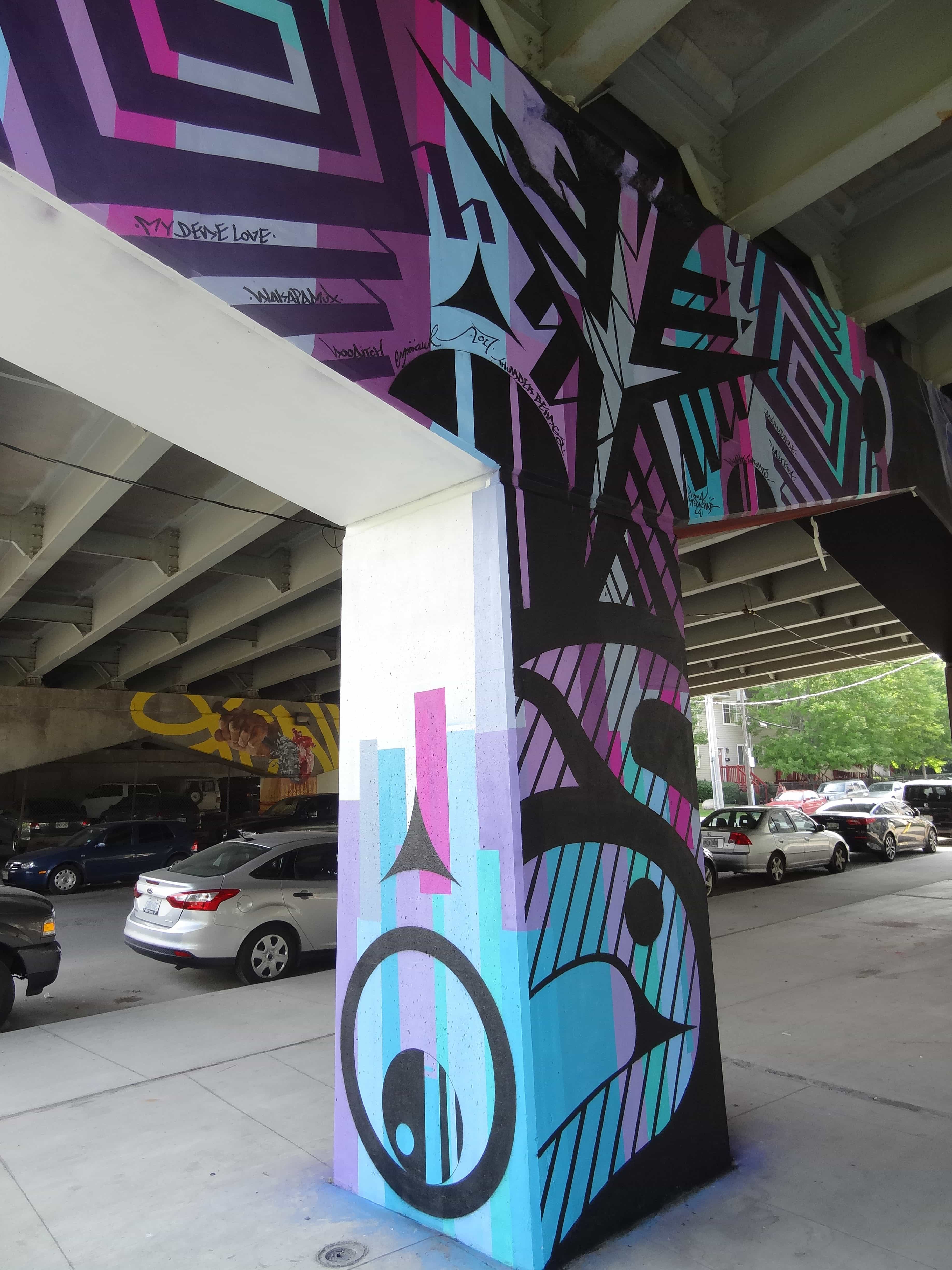 Andrew (Enpaauk) Dexel is from the Nlakapamux Nation and is known for his prints and original paintings. Dexel enjoys using bold, unconventional colours and abstract elements in his compositions. To this end, the artist has created an innovative and contemporary fusion between graffiti and North West Coast Art. The artist’s aim is to create unique transcultural works and to compose modern day interpretations of traditional forms, stories and teachings to inspire future generations. 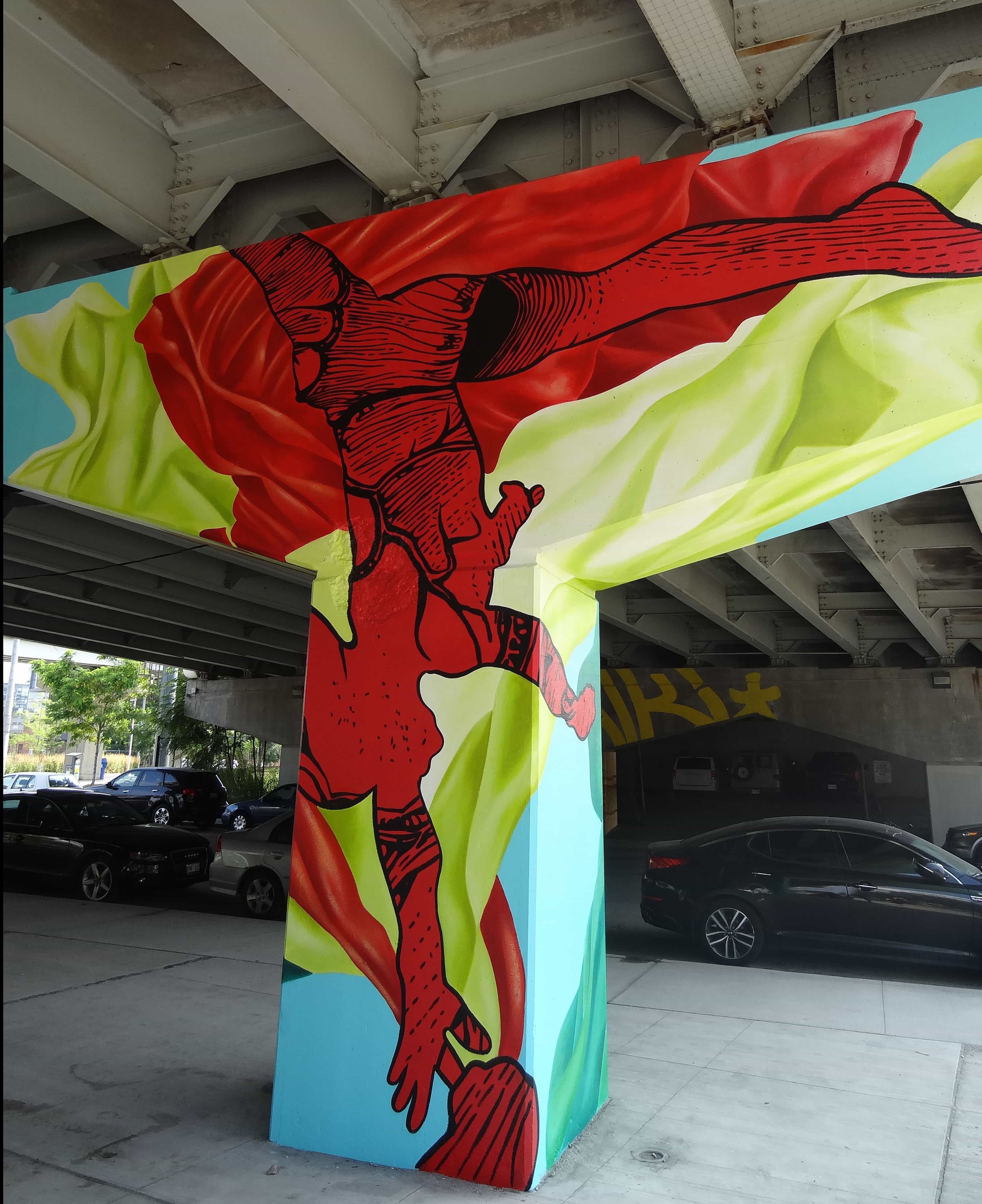 Annie Hamel is a Bachelor in Arts, muralist artist for over fifteen years and member of the Conseil des métiers d’arts du Québec (CAMQ) since 2005. Her artistic creations led her to carry out major projects in Quebec and abroad, particularly in France, Belgium and Mexico.

In recent years Annie has been interested in the pictorial representation patterns and textile materials of various origins, their symbolic values, and the senses created by their juxtaposition. The murals 100 motifs : un paysage and Les balançoires revisit the traditional notions of trompe-l’œil to create textile landscapes from which emanates an enveloping atmosphere. Annie’s works take the form of organic patchworks : their sampled components differ in patterns, colors and origins. They form coherent and structured ensembles. In these compositions, some pieces cross and hybridize. The dissimilarities of certain others pieces are opposed, are responding, are enhanced and mutually contrasted.

Anya Mielniczek is a multi-disciplinary artist whose practice explores combinations of both fine art and street dirt mediums in portraiture, collage and mural work.  Inspired by (plastic) pollution, moody female portraits and our environment, the artist’s work is both figurative and representational, compiled of layers, textures, and the energy felt in unaltered lines. Decidedly playing between a real and fantastical aesthetic which is emotionally charged and experimental. The artist currently resides in Toronto where she continues to develop her vision while staying active as an artist facilitator, assisting and managing in community arts. Mielniczek graduated from Queen’s University in 2012 where she received her BFAH. 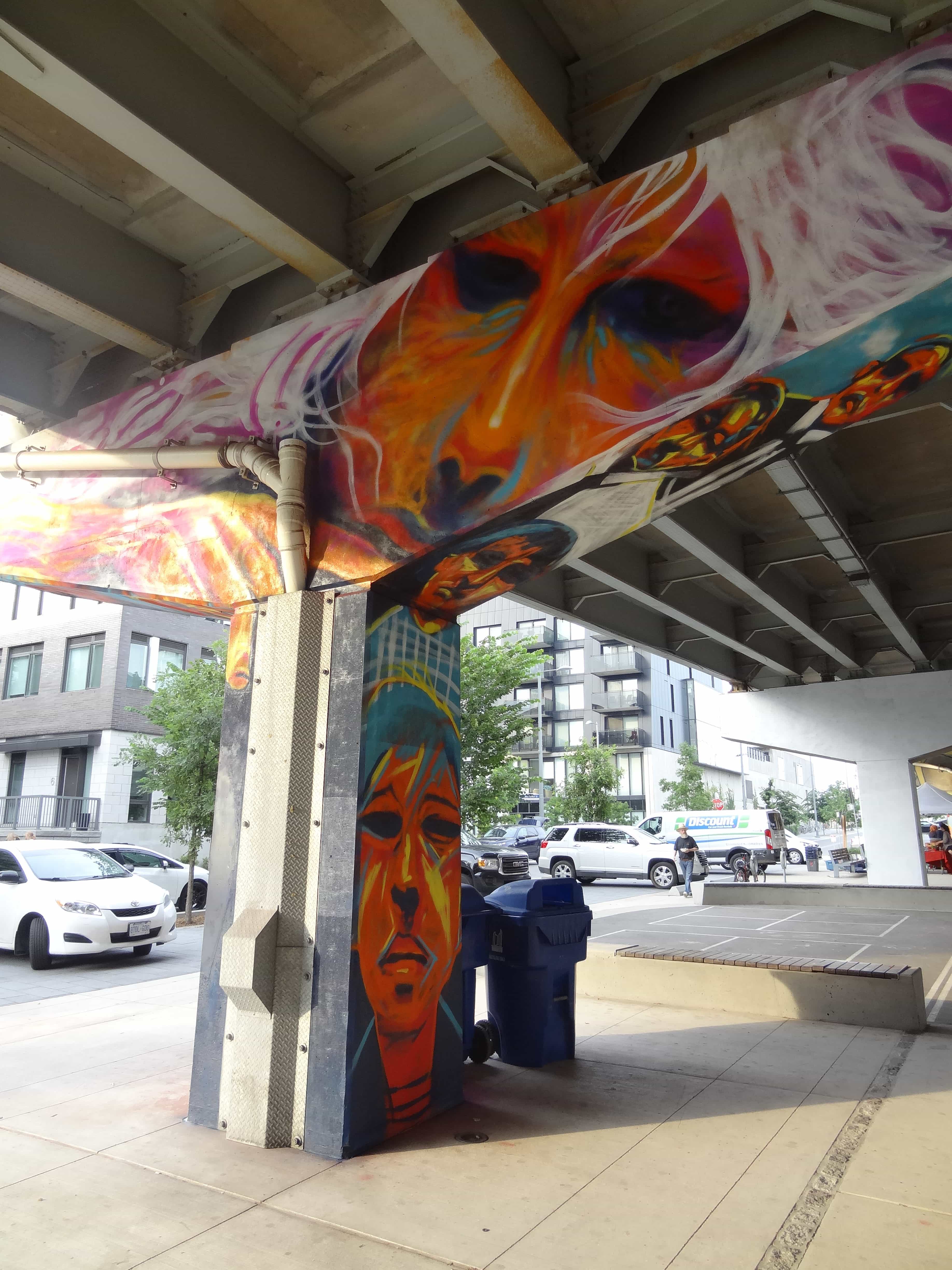 Carlos Delgado is Colombian visual artist living in Toronto, Canada. As an internationally recognized artist, Carlos’s artwork is held in private collections in Canada, USA, Europe, Asia, Australia and South America and is represented by Galleri Lohme in Sweden and Gallery 133 in Canada. Carlos has been a recipient of RBC and Toronto Arts Foundation’ Art Access Award, Toronto Arts Council Community Art Grant and a winner of Power Plant Contemporary Gallery artist in residence community art program. His work has been shown in group and solo exhibitions in Canada and Colombia. 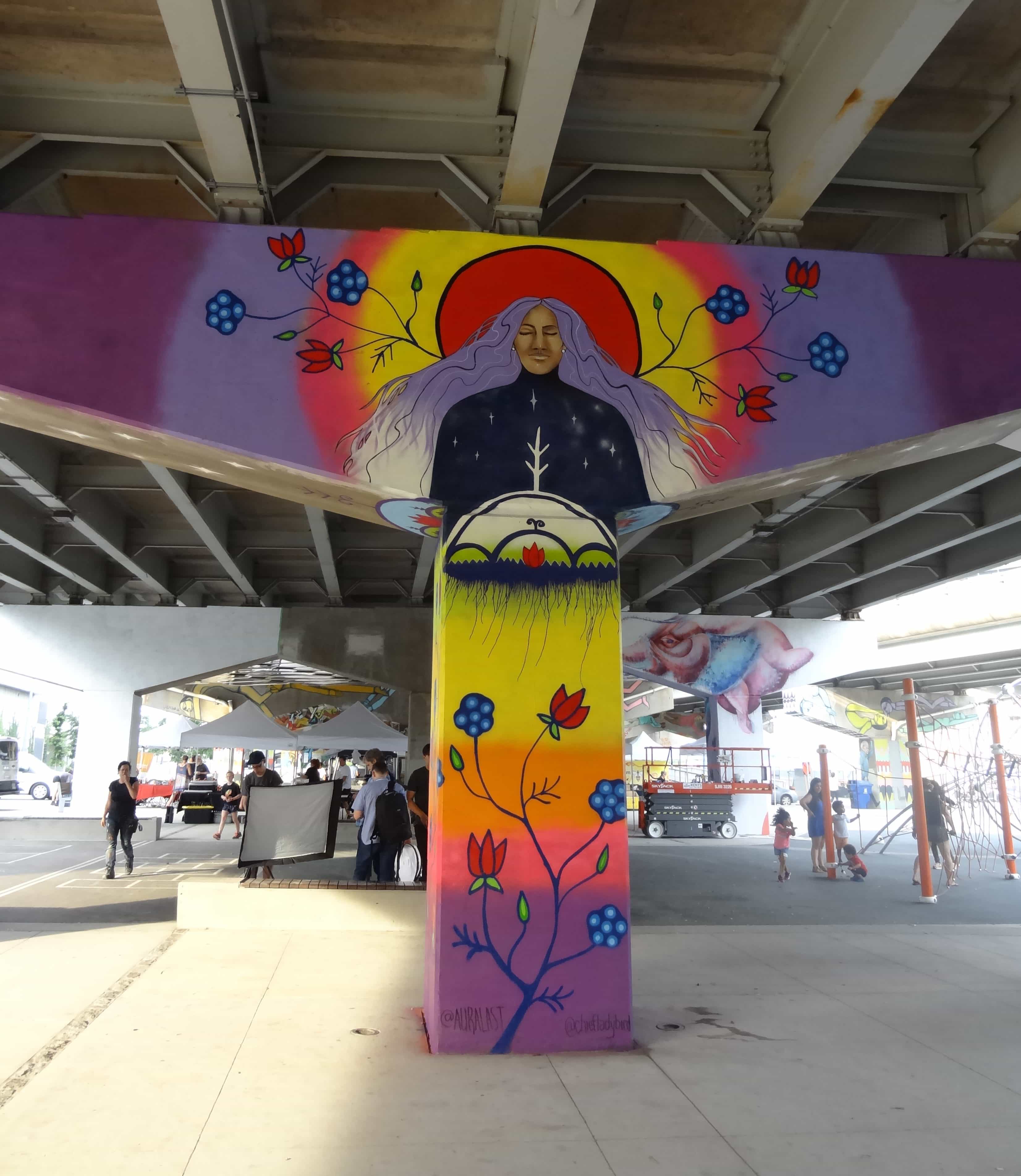 Chief Lady Bird is an Anishinaabe (Potawatomi and Chippewa) artist from Rama First Nation with paternal ties to Moose Deer Point First Nation. She grew up on-reserve and is currently based in Toronto.
Chief Lady Bird’s work exists at the crux of her experience as an Indigenous womyn, wherein critiques of Nationalism and Indigenous identity reclamation meet, resulting in imagery that empowers Indigenous peoples and challenges the lens through which Indigenous people are often viewed. She often creates collaborative murals that allow viewers to step into our worldviews for brief moments, to create dialogue that is imperative to reclaiming our cultural identities in a country that never saw our Worth. 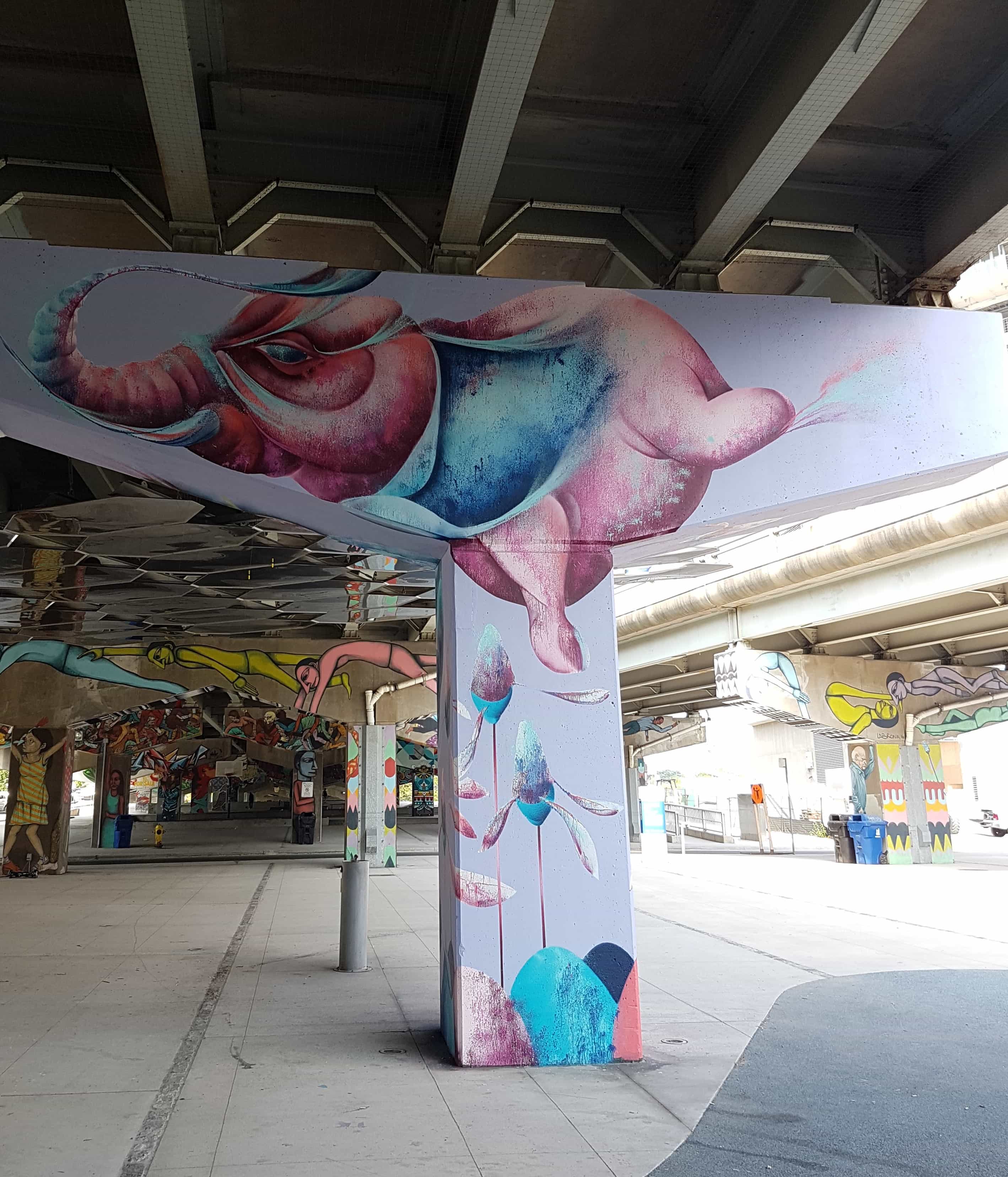 Christopher Ross (aka GAWD) is a surrealist artist from Montreal. Among the hundreds of jobs Christopher completed while pursuing art, was fixing egg machines. Christopher soon discovered the ink used to date eggs was an interesting medium for painting, directly influencing his signature splatters and eventually the use of liquid watercolour. Along with occasional access to painting materials, Christopher’s various jobs made him more aware of the working class struggle, and, relationships among people, nature and the environment. Such themes are subtly rendered throughout his work. Ross reveals a landscape that is both whimsical and complex.

FONKi is an artist from Montreal. He was born in France of Cambodian parents, who were refugees of the Khmer Rouge genocide, in the 70s.  At 15 years old, FONKi discovers graffiti. He gradually grows into one of the most prominent figures in Montreal’s new generation of graffiti artists. Painting all over the world, from the walls to canvas, FONKi managed to adapt his art from the streets to galleries. 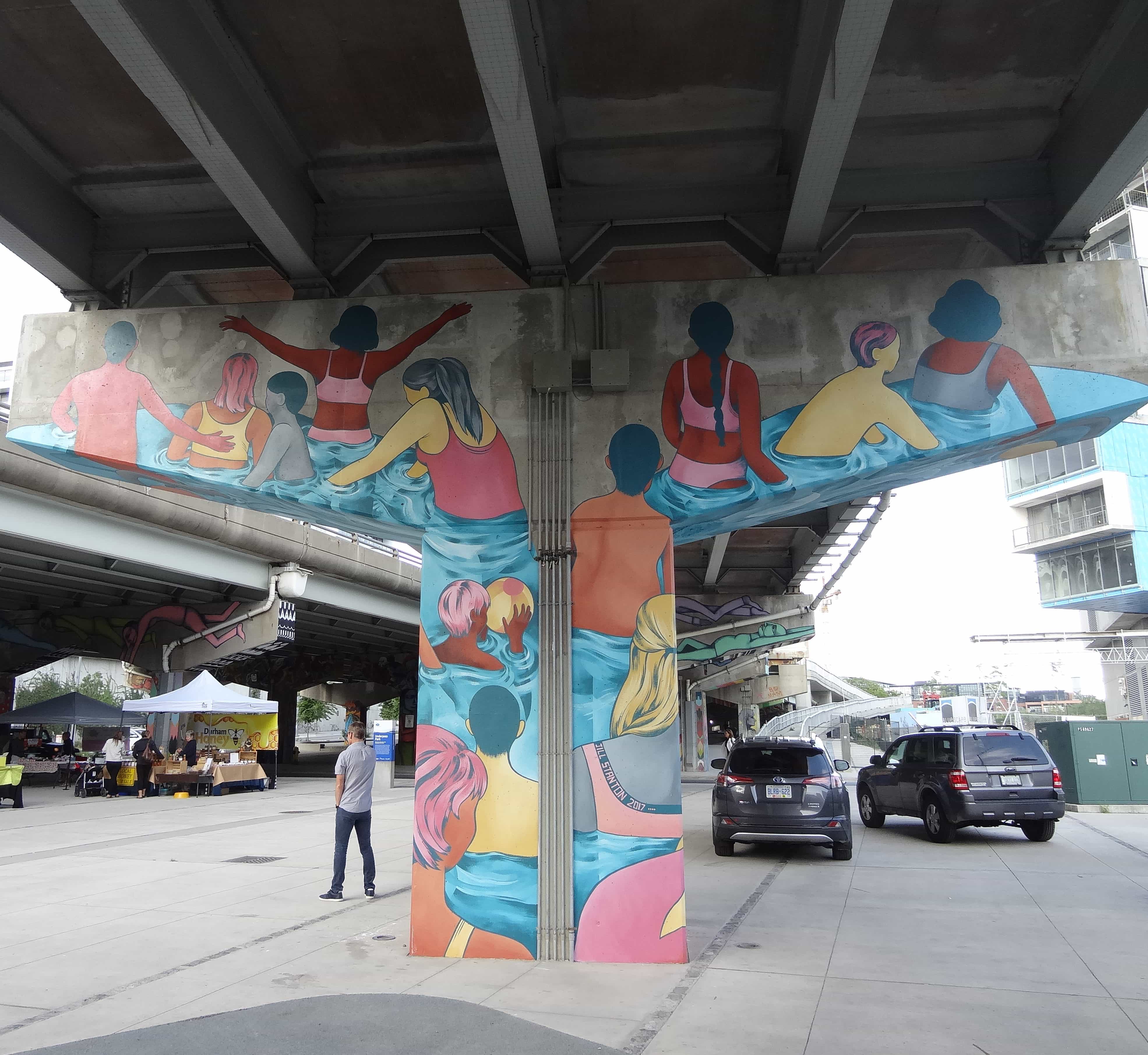 Jill Stanton is a muralist and artist currently based in Edmonton, Alberta. Her work has been featured in several private and public commissions across Canada, including the 2015 Alberta Biennial for Contemporary Art, the Hunter Street Bridge Project in Peterborough, Ontario, and the 2017 Vancouver Mural Festival. Her work often depicts natural forms, mainly plants, and uses them to explore human scale on large walls and installations. 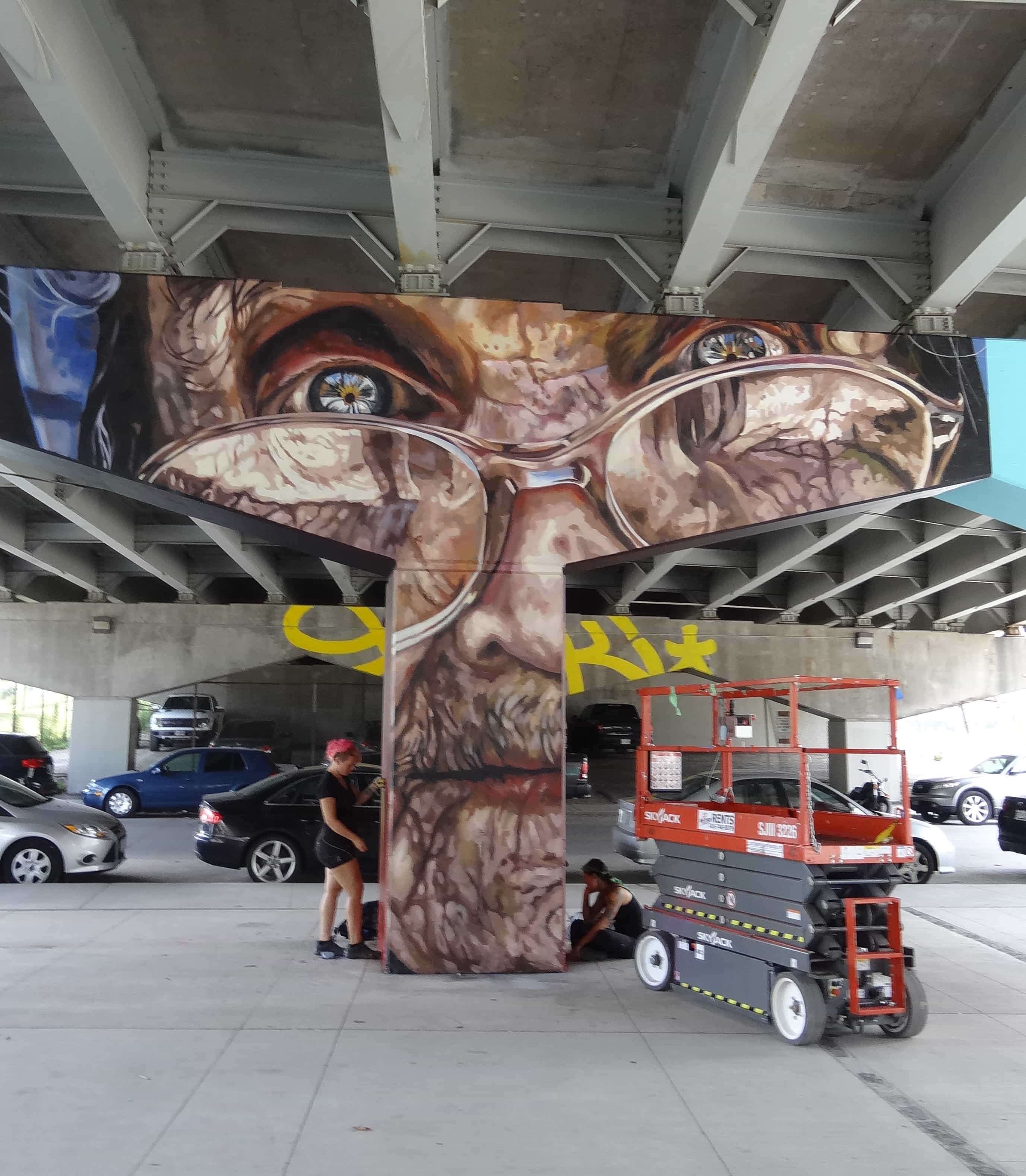 Contemporary muralists and portrait painters Lacey Jane and Layla Folkmann met studying Fine Art in Edmonton, Alberta at Grant MacEwan University in 2007. Their passion and dedication to artistic practice formed an inseparable friendship, which in 2010 became a professional collaboration in public arts. In 2015 they returned to education at Concordia University’s Bachelor of Fine Arts in Montreal, where they graduated with Great Distinction after completing their final semester at the L’Ecole d’Enseignement Superieure d’Art in Bordeaux, France. Together they have painted over 40 murals all across Canada, most recently the MacEwan LRT Vent outside of the new Rogers Place Arena in Edmonton. Internationally, they have executed murals in Honduras, France, and Uganda where they volunteered with an orphanage and an artistic centre for the reintegration of former child soldiers. They currently operate out of Montreal, Quebec, where their practice is dedicated to both exterior murals, and contemporary studio portraiture. 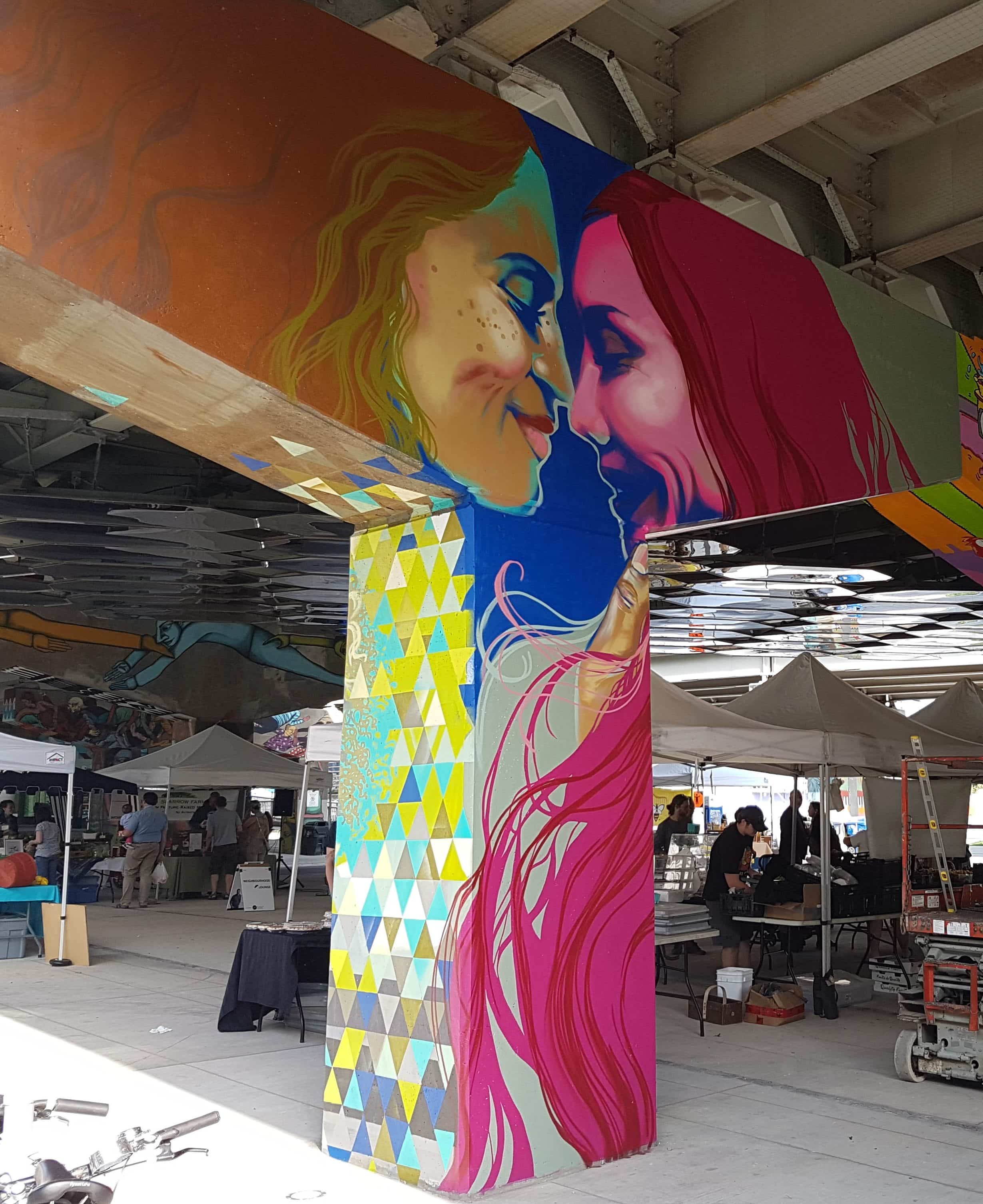 Meaghan Claire Kehoe is a full-time mural artist local to Toronto and her new home, Oshawa. She discovered her passion for working at large scale in 2014 when she started producing wall art for Starbucks and has continued to translate her vibrant, saturated colours and punchy, expressive style to walls all over Toronto and Southern Ontario. The Underpass Project is her first public piece to date, and she feels honoured to have been invited alongside the lineup of incredible talent showcased in this transformative outdoor gallery. Her pillar is a testament to equal rights and “same love,” depicting a real family of women and their effervescent strength and courage. 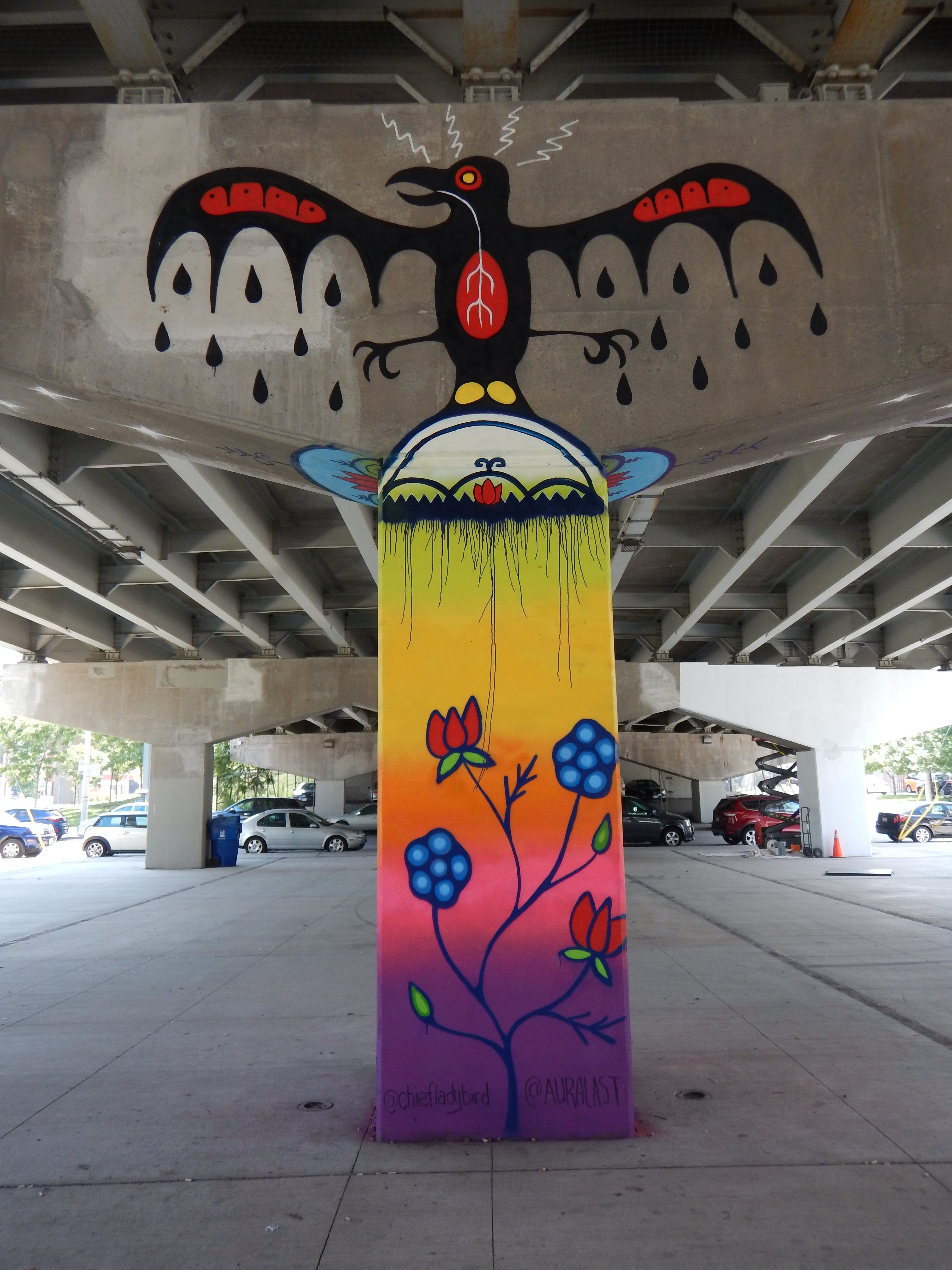 Monique Bedard (Aura) is a Haudenosaunee (Oneida Nation of the Thames) woman from a small town in Southern Ontario. She has been deeply and passionately involved in visual arts for 11 years. In 2006, she began a formal study of visual arts at Fanshawe College in London, ON. After three years of studies in London, she moved to Lethbridge, AB to complete an undergraduate degree at the University of Lethbridge. She received her Bachelor of Fine Arts (Studio Art) degree in 2010 and returned to Ontario where she began instructing group art lessons with children, adolescents and adults. Monique currently resides in Tkaronto, where she is working as an artist, art facilitator and muralist. 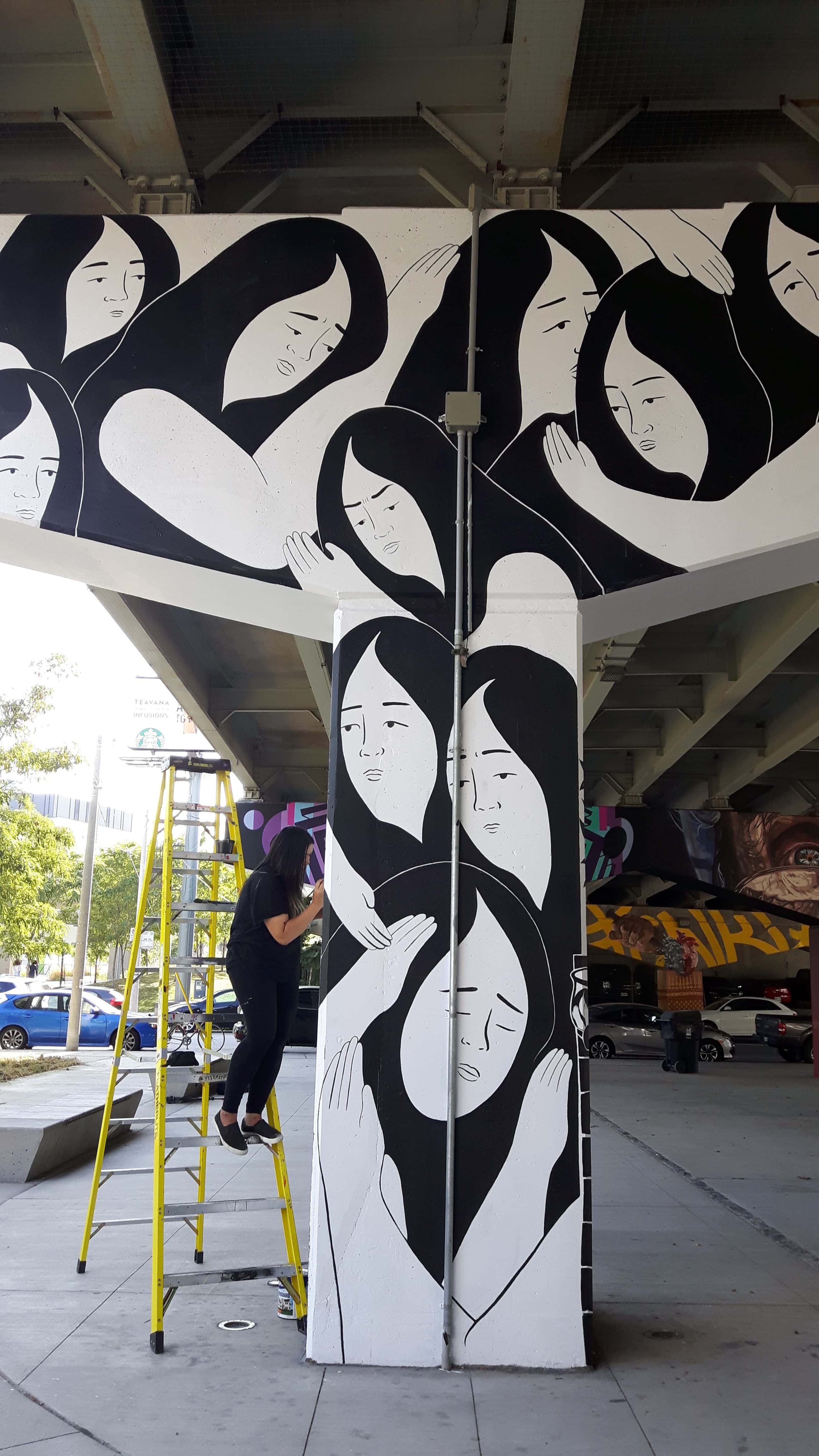 Ness Lee is an illustrator/artist based in Toronto. Her Illustrations have been chosen for award publications such as American Illustration 35 and The Society of Illustrators 57 and has exhibited her works at galleries in Toronto, New York, Boston and Tokyo. Ness Lee graduated from The Ontario College of Art and Design with a Bachelors of Design in Illustration. She has continued to explore her practice using a wide range of mediums such as ceramics, drawing, painting and mixed media sculpture. She is currently represented by Art Works Consulting. 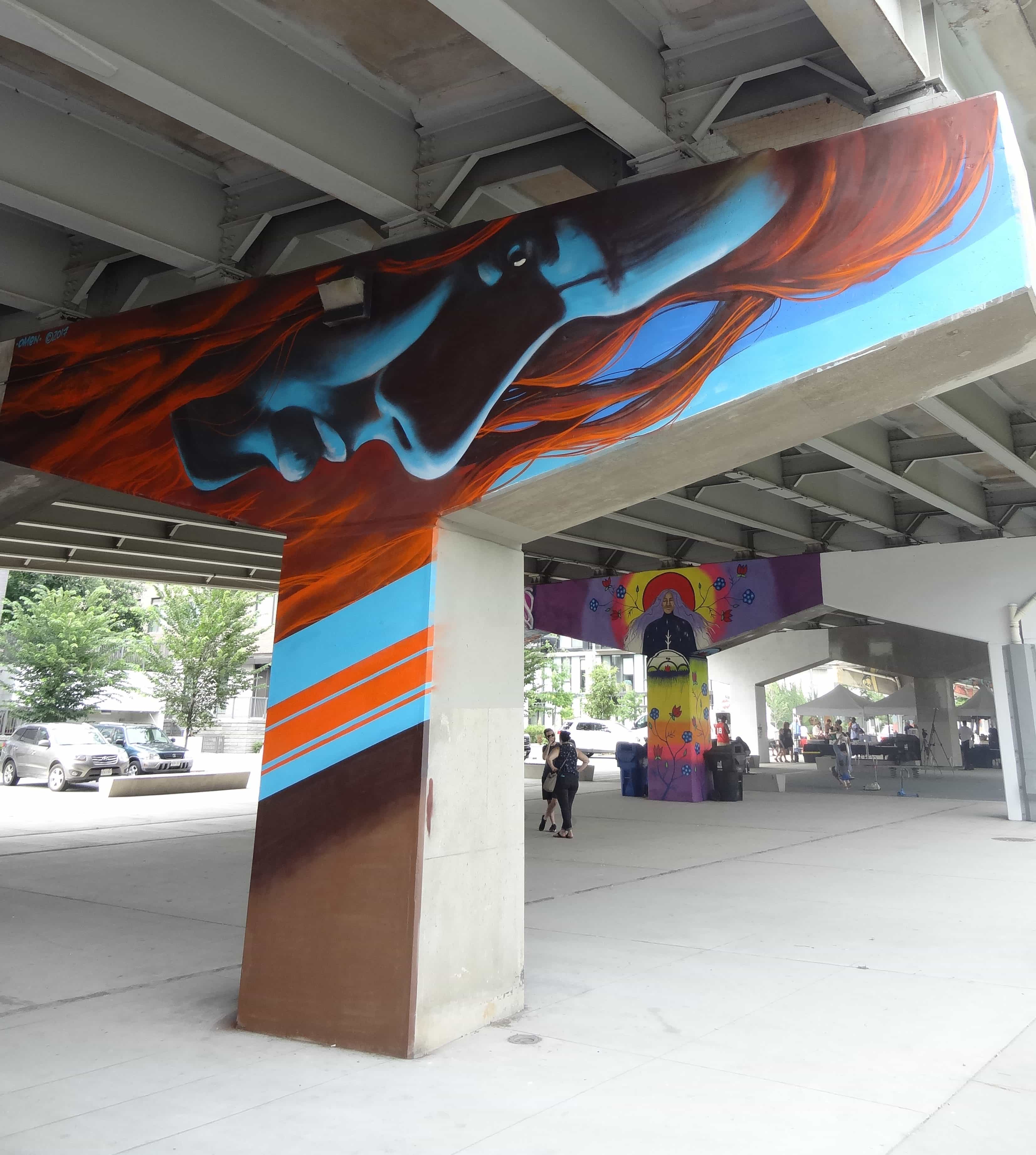 OMEN is a graffiti artist that transitioned to mural artistry. He possesses a massive range and technical superiority that captures the drama of any undertaking. He has been voted simply the best graffiti artist ever. He’s yuge.

Rob Matejka’s interest is using murals to create spaces we enter and experience physically – Rob enjoys large projects engaging large numbers of community members to beautify communities and build community pride. Through his artistic journey Rob Matejka has embraced art as a medium for positive social intervention and is enjoying animating the communities and people he works with – making art accessible to all through workshops, mentoring, and adding to the growing outdoor public gallery.