‘INTEROH GALE’ MURAL BY MEDIAH HAS TRANSFORMED THE UNDERPASS AT FINCH AVE AND MORNINGSIDE, SCARBOROUGH, SUMMER 2019

The mural INTEROH GALE by artist MEDIAH in partnership with Mural Routes in Malvern, North Scarborough is themed around sustainability and has provided local youth and emerging artists mentorship and training opportunities.

ABOUT THE MURAL CONCEPT AND DESIGN

The new mural is titled ‘INTEROH GALE’. “Interoh” means “entering into” or “gateway” and “Gale” defines “a very strong wind”. The ‘INTEROH GALE’ mural illustrates a gateway to a sustainable future by using renewable resources, such as wind.

MEDIAH’s design illustrates the delicate and complex balance of preserving the environment while continuing to develop industry and expand urban growth by painting elements of nature and symbols of renewable energy sources amongst a futuristic, abstract setting. Silhouettes of wind turbines and a maple leaf narrate the gale-force winds that we can harness to generate a renewable, non-polluting source of energy for the increasing number of households. A range of oranges, maroons, pinks, plums, and purple hues were used to illustrate colours found in a Canadian skyline when the season transitions between Summer and Fall. This transition and change of season represent the drastic shift in approach that humanity needs to make to sustain our environment.

These natural elements and colours are juxtaposed by MEDIAH’s signature bold, highly detailed linework and futuristic, architecturally designed shapes. The intersecting lines and shapes combine, shift, move, and collide on the image surface in order to depict the repercussions of humanity’s insatiable thirst for a faster and more technologically advanced, urbanized world.

The mural artwork’s theme addresses the idea of sustainability and the complicated relationship between the environment, nature, urban industry, and ever-expanding city infrastructure. The mural specifically addresses the need to preserve green spaces and develop systems and policies that will keep our city and communities sustainable as the City of Toronto continues to grow and develop at a rapid rate.

The highly visible mural artwork has beautified and revitalized this area by transforming a gray, ordinary bridge underpass into an awe-inspiring and visionary landmark that will bring pride to members of the surrounding community for years to come while reminding viewers about issues of sustainability and the environment.

This project involved a youth mentorship component that provided a young aspiring artist the chance to work closely with a successful professional artist first hand. The mural project provided an invaluable opportunity for the youth to build essential skills for a future career in the arts. MEDIAH also led an Aerosol Art Workshop with local youth and staff at the nearby Malvern Community Recreation Centre in the Spring, introducing them to a history of graffiti and techniques.

Community members heard more about the project at 1LoveMalvern networking event on June 18th, where they could meet the artist, ask questions and learn more about the project plans. Community members and mural art admirers joined the mural Unveiling on September 20th from 3:30-6:30pm as part of the Malvern Harvest Festival at Neilson Park. Following speeches, MEDIAH led a walking tour to the mural site at 4:30pm for photos and an official ribbon cutting. 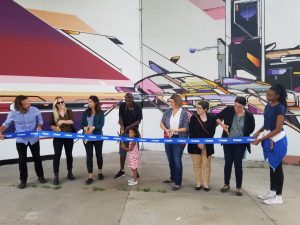 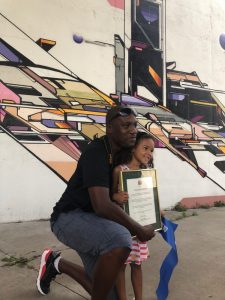 The mural project has engaged community members, City of Toronto residents, and tourists alike by allowing people from various walks of life, age groups, races, and socio-economic levels to enjoy the step-by-step creation and permanent installment of a contemporary art piece that is freely accessible to the public.

The production of the bridge underpass mural has been professionally documented and posted on social media platforms (using the hashtag #InterohGale) so that people from the community and all over the world can track with MEDIAH’s progress and final mural project.

MEDIAH, or Evond Blake, is a Canadian multidisciplinary visual artist who has worked under the pseudonym MEDIAH for 25 years. An Internationally renowned visual artist, MEDIAH is a trendsetter sparking new ideas and originality by blurring the lines between post-graffiti and dynamic abstraction. Blake’s work consists of weaving traditional street art forms with traditional painterly techniques using many forms and approaches found in digital art and design. Heavily inspired by avionics, mechanical engineering, and schematics, the artwork glorifies and captures the essence of speed, motion, dynamism, and force to create movement on the image surface. Blake’s work provides the viewer with not only this glorification of speed relating to the thirst for a faster and more streamlined world but also its unavoidable repercussions of collision, disaster, and chaos.

Mural Routes is the only not-for-profit art service organization in Canada dedicated to the creation, development, and promotion of public wall art.

This project is made possible through the City of Toronto StreetARToronto Partnership Program grant. The StART Partnership Program provides support and up to $50,000 in funding for large-scale projects that support the program’s mission to revitalize and engage communities through mural, street and graffiti art. StART values projects that are aligned with broader neighbourhood revitalization efforts and target areas of graffiti vandalism and is interested in partnering on projects that: are innovative in terms of design, delivery and message, are valuable to the community, reflect neighbourhood identities and are site-specific in design, demonstrate a strong community engagement component, foster expanded partnerships within the arts community, and provide mentorship or training opportunities for youth or emerging artists.

We would like to thank Ward 25 Councillor McKelvies’s office for their support of this project, as well as our community partners Malvern CRC, Malvern FRC and 1LoveMalvern. We would also like to give a special thanks to Loop Colors for sponsoring the aerosol paint and to Nazli Nahidi and Jessica Blake for their dedication and hard work in assisting with the mural production.