20 Years of Murals, a Retrospective Exhibit

This August, local arts service organization Mural Routes has partnered with Morningside Library to display artist mural designs from the past 20+ years of the organization’s mural making history.  2014 is important year for Mural Routes;  the organization was officially incorporated in 1994 and is celebrating its 20th Anniversary.

The 20 Years of Murals exhibit shows viewers a behind-the-scenes look at mural artists’ designs and sketches, expertly planning out composition and colour for their wall site. Designs are displayed in order by date, to showing the evolution and changes in artistic style over the years. The exhibit also includes photos of the finished murals for comparison.

Mural Routes was initiated in 1990 as a public art project of the Scarborough Arts Council with the purpose of celebrating unique features, events and heritage of Scarborough through art. The exhibit displays mural designs from the early years of Scarborough Arts Heritage Trail project along Kingston Road, to current youth mentorship projects like the The Rainbow Tunnel and Eastern Gateway Mural in Highland Creek as part of the 2014 Cultural Hotspot East initiative.

This exhibit will be on display at the Morningside Library, 4279 Lawrence Ave E. for the months of August and September. Library Hours are Monday to Wednesday 9am – 8:30pm, Thursday 12:30pm – 8:30pm, Friday and Saturday 9am-5pm. 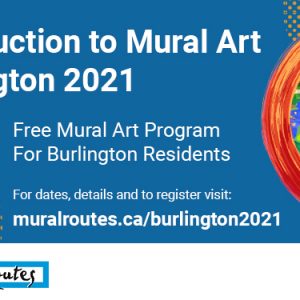