Best Viewed: From Mill Street, on the side wall of CIBC.

The deep blues and purples of the sea and mountains on the left flank the solemn portrait of Mill Manager John Humbird, who in 1924 oversaw the building of the fourth Chemainus mill, one of the largest of its kind in the world.
The mural symbolizes the rivalry and relationship between Humbird and another powerful character in Chemainus history, H.R. MacMillan. The lumber baron, whose company in the early 1940’s purchased the huge fourth mill pictured in the mural, appears at the centre of the painting.

After the takeover of the mill, the word “Manufacturing” was dropped from the name and it became simply the Victoria Lumber Co. The closed door below MacMillan represents the mill office door, behind which took place much of the history of the mill’s success over the years. The mural is bordered on the right by images of both the wealth of the natural forest and the richness of its harvest, the wood products which made many fortunes.

This was one of two murals painted as part of the 10th Anniversary of the Chemainus Arts & Business Council celebrations. 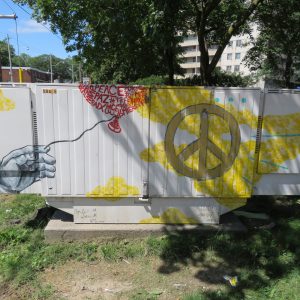 Utility Cabinet at River and Oak 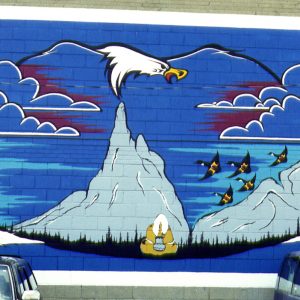 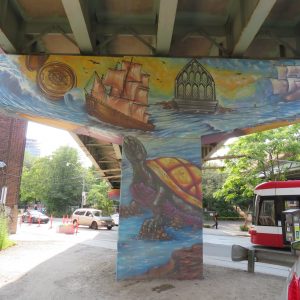 Frozen Memories: THE PAST