Fong Yen Lew was known to almost everyone as Hong Hing, the name he gave to his store. Born in the late 1800s, he came to Canada and set up his business in Chemainus around 1915. His enterprise began as a laundry, but he later sold groceries, chickens and second-hand goods. Eventually, he expanded into bootlegging and running a gambling house.

Hong Hing was welcome everywhere in Chemainus, just as he welcomed everyone.

His easy credit terms and kind heart probably lost him plenty of money over the years but gained him many friends. In the 1950s, the opening of a government liquor store in Chemainus foretold the demise of Hong Hing’s establishment. His original building was eventually declared a fire trap and demolished. Hong Hing returned to China, presumably to die. But to the surprise of only a few who did not know him, he instead married a woman 40 years his junior, who eventually presented him with an heir. 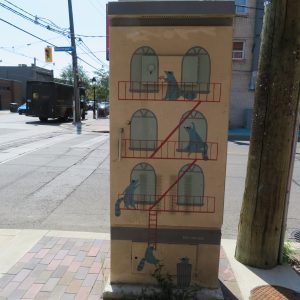 Traffic Box at Dovercourt and College