We are pleased to share the TERRA STRAT’AA Underpass Mural Project (2015) by Mediah!

This project, funded through StreetARToronto, has transformed both sides of the Underpass at Eglinton Ave E. and Leslie St, Toronto.

The TERRA STRAT’AA is the second landmark mural painted by MEDIAH for the City of Toronto. The project was painted and installed on the railway underpass on Eglinton Ave in an area filled with wildlife, lush vegetation and parks. The project concept entitled ‘Naturo-Dynamism’ entails the symbiosis between nature and technology and their coexistence within the same space. This was inspired by the Eglinton Crosstown lightrail system which is being built just 500 metres away from the site.

TERRA STRAT’AA – ‘NEOSTRAT’AA’
South Side
80ft X 17.5ft
The South side of the underpass entitled ‘NEOSTRAT’AA’ is inspired by the flight and migration patterns of Canada geese in their natural habitat of the surrounding area. The complex artwork is the result of the dynamics of Geese in flight while mimicing the mechanical movement of their urban surroundings.
TERRA STRAT’AA – ‘PROSTRATA’
North Side
80ft X 17.5ft
The North side of the underpass entitled ‘PROSTRAT’AA’ is inspired by avionics and aircraft while hovering and connecting to the natural landscape below. The mechanical components of the piece are driven by the presence of Canada geese in marshlands similar to the ones located only a few metres behind the site. While the South side is heavily inspired by the flight patterns of Canada geese which dominate the area, the North side shows the technological ideal of aircraft built and controlled by birds.

Thanks to Mediah, StART and all involved in the project! 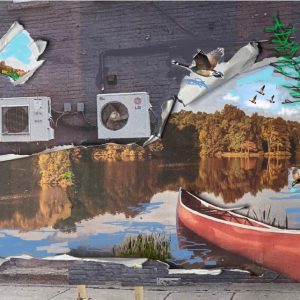