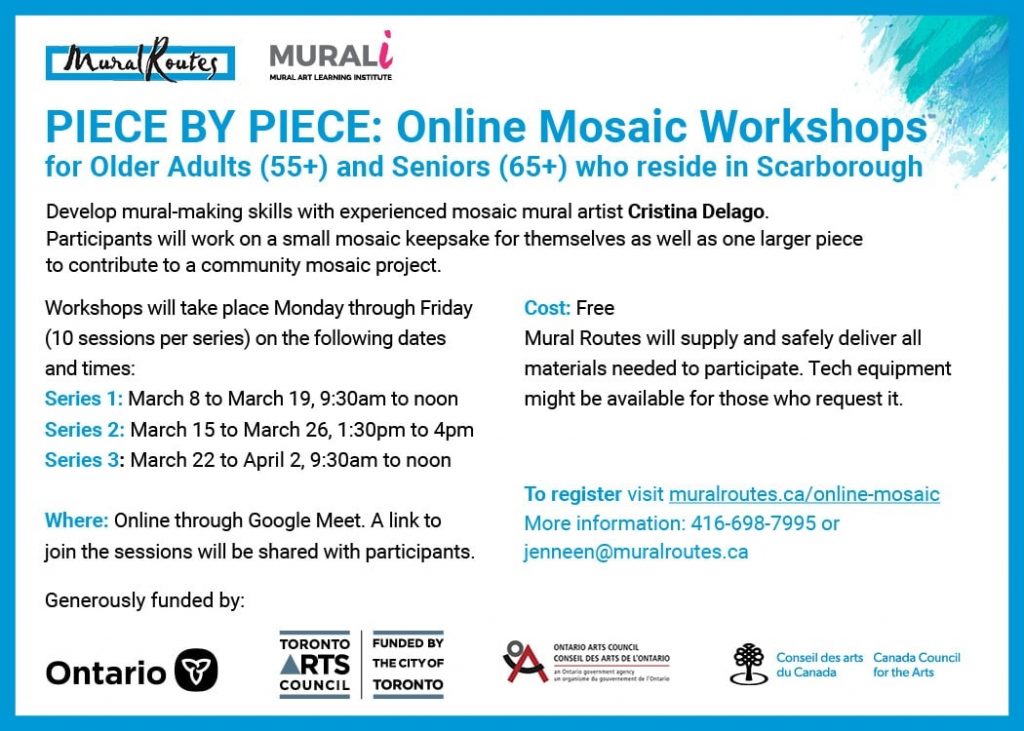 Assistant Instructor
Hosting three separate online workshops in a one-month period is intense. The instructor, Program Manager, and technical support all found the schedule to be intense. This program was rolled out under special circumstances – during the grant writing phase of this project the schedule was to deliver one series a month over three months. However, even with an extended schedule that we planned for initially, the program would greatly benefit from the additional support of an assistant instructor. Going forward with this program, an assistant instructor will be needed to assist the instructor with slides, facilitating screenshares, and monitoring the chatbox and muting functions.

Avoid Overlapping Timelines
For this program, we had the series overlap in order to fit three series into the designated time frame. However, this turned out to be confusing for the instructor – when the morning and afternoon sessions are being instructed at different points of the curriculum, it is hard to keep the lesson plans for each class straight. In the instructor’s opinion, it would not a problem instructing a session in the morning and a session in the afternoon as long as the curriculum was the same for both classes each day. Going forward, if we decide to have a series in the morning and a series in the afternoon, these series should have the same start and end dates, daily lesson plans, timeline, curriculum, etc.

Curriculum, Daily Agenda, and Information Handout
With the support of two advisors, the instructor created a general curriculum for the program. While the goals and outcomes were met with each series of this program, in the future, a clear outline and more detailed curriculum would be helpful for participants to follow and for the assistant instructor to know what slides or videos to present and when. We received feedback from a few participants that a daily agenda would be helpful as well. I would recommend that the instructor submit a daily lesson plan for each series of the program. Based on the feedback received, a lesson plan for participants to follow was expected by this demographic, who enjoy structured classes with a clear outline. As the support person for sharing slides, I would recommend a detailed lesson plan for the assistant instructor with instructions on slides, videos, images, and other information that they will need to assist with each lesson.

The instructor included a two-page handout for the participants to keep after the course with information about Mural Routes and how to stay involved with the organization by becoming a member and joining the newsletter sign-up list. The handout also includes vital information taught during the course such as the material to use when creating an indoor mosaic vs. an outdoor mosaic, a list of supplies, and where to source materials.

Timeline
Based on feedback from participants, many really liked the daily sessions. Originally, during the design of the program we did not have daily lessons scheduled. However, many participants mentioned that they liked having it every day for two weeks. There were also a few who mentioned that it did feel like a lot to come every day for two weeks. Going forward, I would say that we could safely offer two or three sessions a week to retired folks. Ten sessions was a good amount of time to have the participants learn, practice, and execute their mosaic.

Material Kits
All the supplies for the workshop were delivered inside a large storage container. This was a successful way to transport and deliver the materials and supplies. It also provided the participants with a reusable and convenient container to store their art supplies in their homes for easy pull-out and put-away access. This is a successful practice to include in future programs. In the future, I would suggest including print-offs of the instructions and curriculum/agenda in the kit boxes. This way the participants have an electronic copy in their email and a physical copy in their kits.

Emails, Waivers, and Photo Releases
A few of the participants were not receiving my emails. It became important throughout the workshop to inform the participants when an email had been sent out and to check their junk folder for communications. In the future, I would include a section in the introduction instructions with a list of Mural Routes contacts and to add to their contacts list to avoid emails going to junk mail boxes.

Providing technology to participants
Mural Routes purchased six iPads (8th generation with WiFi + Cellular capability) for these workshops, three of them with prepaid, Internet access, and made them available for participants to borrow. Two of the devices with Internet were requested and provided (one for series 2 and one for series 3). Shock proof cases with a built in stand, were purchased and installed on all the iPads before use. The workshops were delivered using Google Meet.

Data
A sharable data plan from Rogers mobile was purchased.  Approximately 17GB of data was used per participant (1.5 hours per session x 10 sessions each).  This option worked very well, but we will look around for other options, such as the LTE hotspot, before purchasing this one again.

Setting up iPads for participants
We set these devices up with the expectation that the user would have little to no experience with using a tablet.

Each of the requested iPads was set up using its own Apple ID, one Apple ID allocated for one series and one for the other. If more iPads were being borrowed, they would be setup with the Apple ID corresponding their workshop series. The Workshop Meeting links/reminders were set up in iCal and could be edited remotely by logging into the iCloud account corresponding to each of the series. Having the same Apple ID per each of the series eliminates having to set up the meeting reminders on iCal six separate times (if all the iPads were to have been distributed).

Setting up online Workshops with Google Meet
Each series of workshops was set with a separate meeting code/link which would be used for the whole series (so three in total).

Before the iPads were lent out:
In Settings: WiFi turned off, Bluetooth turned off, Cellular Data turned on, Location Services turned on, Ask Siri turned off. The devices were fully charged and the charger was inserted so the user would know where it connects to the device.

Mobile Device Management (MDM):
In order to keep track of all devices in one place, we signed up for a free account with Miradore (some installation required on the devices).  Because we are using the free account, it does not come with location services and we still need to have access to the iCloud accounts for the “Find my iPad” feature. Miradore is still worthwhile for being able to see all your device inventory in one place, whether they are on or offline, how much free space they have, what apps they are running, all the technical details about each device, and we can remotely set a passcode or lock, wipe, clear passcode or enable “lost” mode.

Technical Lessons Learned During Live Workshops
These lessons are specific to Google Meet, but similar considerations would apply to any online meeting platform.

Some important notes for this:

Virtual phone number
In order to protect the phone numbers of our staff while working remotely, we used Grasshopper to set up a virtual phone number with extensions to reach tech support and program support.  Staff were required to set up an app on their phone/desktop and a general voicemail with instructions for extensions was recorded.  Messages could be checked from the website or the app, and the app was used to dial out – protecting the real phone number of the device.  This was important mainly for tech support issues and to arrange delivery and pick up various workshop materials.