Nayan wished to involve the neighborhood residents in creating a colorful mural that would reflect the bond that has been built between the Patro center and the community over the last century. Using the triangle shapes in Rafael Sottolichio’s mural, the artists added two figures that are helping each other climb higher. One of the figures is made up of mirrors, which renders the mosaic interactive. Painted spirals, a visual element also taken from Sottolichio’s mural, were added by Peru Dyer to complete the multi-medium mural. Work on the mosaic began in September 2009. A total of 7 weeks were necessary for its completion, including 3 weeks of preparation and assembling of ceramic pieces as well as 2 weeks for grout and finishing (ex. polishing). 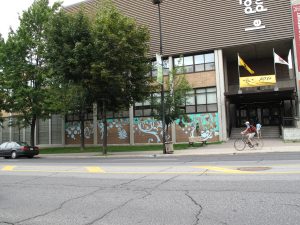