The composition of the work presents, on the left, the modern building to the south, and on the right its façade on St. Antoine Street. The kaleidoscope at the centre of the mural is composed of the glass walls of the atrium, creating an architectural visual game in the corner of the two walls. The silhouettes of the passerby become the characters of this mise-en-scène, and live within the décor of the shifting angles.

Commerce is presented in the mural in relation to public space, a place where the ideas and the dreams of the individuals or groups of people are expressed and take on a life of their own in the eyes of others. The ideas come together in synergy and intertwine: this dynamic makes the public space a fundamental element of commerce, underlining the humanity at the heart of the notion of exchange. 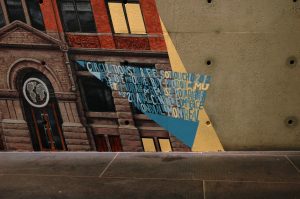