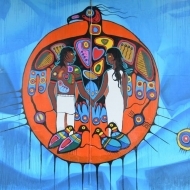 As an Indigenous painter and Muralist, the purpose of Cote’s research is to unearth, and reveal, his cultural experience and knowledge of signs of Indigenous symbols, language and interpretation. Openings are thus created both within the archive/academia and broader public that enable these imbedded stereotypes to transform under the gaze of an Indigenous based interpreted presence and intervene in the cross generational colonial bias.

Philip Cote emphasizes the resurgent power of nature and the importance of listening to Indigenous teachings through his Mural Art. Philip has created public artworks for the Mississauga’s of the New Credit First Nation (Kiinwin Dabaadjmowin “Our Story”, a 1000 square foot mural), Fort York National Historic Site (Niinwin Dabaadjmowin “We Are Talking”, a 20 panel, 80 foot mural), and the City of Toronto (The Nindinawemaaganidok “All My Relations”, a 1600 square foot mural). In late 2017, Philip received a grant from the Toronto Arts Council to create a mural based on the Niagara Treaty of 1764 for Massey College, University of Toronto with the theme of Truth and Reconciliation/Canada 150. Also in 2017 he painted the “Indigenous History of the Land” at Spadina & Dupont and “Resurge: First Timeline” at the Humber River. Just recently in 2019, he created a large 120 Foot x 37 Foot Mural entitled “The Original Family” for CentreCourt Condos in Toronto, and also just completed “The Gathering of The Clans” Mural for the Boardroom Table at Rogers Communications Inc. Head Office at 1 Mount Pleasant Road.

Most recently Philip is working on a large-scale Mural for Suncor Energy, and The Bickford Learning Centre, Scotia Bank, and the MLSE (Maple Leaf Sports & Entertainment Ltd.) Launch Pad in Toronto.

Philip has won numerous TABIA awards for his public Street Art Murals Across the City of Toronto.