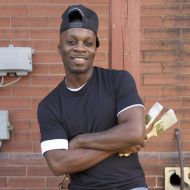 Omar Hopkinson
omscreates@gmail.com
I am a CULTURE CONTRIBUTOR, Multi-disciplinary Artist, Educator, moderator and facilitator. I create, mentor and advise individuals and organizations in the areas of Art, Leadership and Life Skills.
This user account status is Approved

Looking through the lens of art, “medium” refers to the substance an artist uses to create. Taken literally, you visualize the various forms of lines, colour, and shape as they come to life. Beyond those tropes, an artist, a person, with substance brings value to the world around them, creating something physically that has the power to connect and evoke emotion.

Omar “Oms” Hopkinson was born in Toronto, Canada and was inspired to create and share his passion for art at a young age. As he’s matured through the years though, his art has become the medium in which he inspires, draws the best out of his subjects and forms community. His authenticity and love for not only what he does, but the people whom he serves, bleeds onto the canvas.

Oms was raised by his single mom, Patricia, and recognizing his own love for art pursued higher education as a young adult, formally studying and obtaining degrees from both Ontario College of Art and Design (OCAD) and Toronto School of Art (TSA).

Drawing inspiration from Toronto’s urban culture, Oms was an early navigator of Toronto’s hiphop scene as a creative contributor and member of “The Circle”, a Toronto-based collective of artists including names like Kardinal Offishall, Choclair, and Jully Black. He continued this journey and became recognized as a live painter, creating art at various events and music festivals such as Outdoor House Music Festival and Escapade Music Festival.

As his scope broadened, Oms has worked across other industries and organizations, whether through his commissioned fashion projects with Footlocker, charitable work with the United Way, or his continual community work as a Board Member for Arts Milton.

Oms reimagines what art means today, painting on all surfaces from canvas, to walls and various structures with a clear understanding of colour and its ability to evoke emotion. It’s through his medium he intends to inspire, building on his substance and leaving a positive impact.