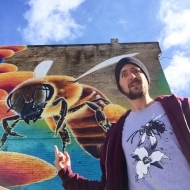 Nick Sweetman
http://nicksweetman.ca•nsweetman@gmail.com
I believe as an artist working in public space, I have a responsibility to not merely decorate and beautify, but also educate and inspire the viewer, making them question their relationship with the world around them and with nature.
This user account status is Approved

Doodling in his early years and focusing on visual arts in his teens, Nick's main passion was art for as long as he can remember.

Inspired by the stories he read as a child, and later Pop Art and Surrealism, Nick was also awestruck by the world of graffiti, constantly looking out for new pieces by his favourite artists, and collecting his findings in photos. Visiting England in 2008, he saw a street art exhibition at the Tate Modern and admired the towering murals by artists from around the world transforming London’s walls. The experience impressed upon him the power of public art and inspired him to explore painting on a larger scale, and projects that had the potential to transform the cityscape in the same way.

He began experimenting with spraypaint and paste-ups, going on solo graffiti missions and trying to push his skills farther. After living, working and travelling in Asia for a year and a half, Nick returned home and started painting and doing freelance work full-time. He completed his Masters of Fine Art from OCAD University in the Interdisciplinary Art, Media and Design program, where he pushed his practice into unfamiliar territory, exploring new media like installation, sculpture, photography and video, and writing his research assignments on graffiti and street art. His thesis work analyzed the act of representation through digital and mixed media studio-led research, and resulted in his first solo show, "Digital Adaptations," at the OCAD Graduate Gallery. He also started exhibiting paintings in a variety of venues, from restaurants and bars to group shows in galleries around the city, where he made important connections in the Toronto mural scene.

He began working in the public art sphere at this time, completing a mural training certificate through Mural Routes and collaborating with local youth groups on public art installations through non-profit organizations like the STEPS Initiative. Through these networks, he started getting offered mural jobs, and has been fortunate enough to head up a number of mural projects across the city as well as collaborate with many artists he grew up admiring.

“My dream is to continue collaborating with other artists and learning about how they work as well as the process of working together... putting our strengths together to produce something that couldn’t have been produced individually, I think that’s one of the most exciting things about getting to work on city mural projects. It makes you stronger as an artist to have that give and take... and I’m always looking to learn what I can from the artists that I admire, whose work I like to see."

Everyone uses terms differently, but Nick wouldn't call what he does now "graffiti," though he has a deep love and respect for the art form, and he knows that if it weren’t for the writers that came before him, he wouldn’t have the opportunities he does today:

“I owe everything I have to the artists that paved the way for first graffiti, and then street art, to be accepted and sought after in public space. The people who inspired me before I was a painter, people who often worked and continue to work in secret, people who created the styles and techniques and spectacular art that has been exploding on walls and trains and into galleries all over the world for decades... I'm honoured to continue these traditions and to have the opportunity to contribute to making the city a more exciting place by covering its walls in art."

The last two years, Nick has been populating Toronto’s walls with murals dedicated to pollinators to raise awareness about the threats facing ecosystems worldwide due to toxic pesticide use. He hopes to inspire conversation around wild pollinators – the species that pollinate the wild plants every living thing depends on, highly susceptible to even small amounts of the chemicals present in some pesticides.

"I always try with my work to be playful and expressive, from the smallest drawing up to the biggest wall. But having the platform to inspire and influence people in their daily life as they walk down the street, I feel like there’s an opportunity to make them think about what is going on in the world. I try to paint what inspires me and fills me with awe - plants, animals, natural processes - and hopefully inspire that respect in others. I hope to continue to push this art form, keep on collaborating and exploring whenever possible, and encourage environmental consciousness in Toronto and beyond.”