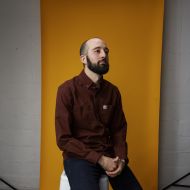 Dominic Laporte is an Ottawa-based muralist and illustrator whose work combines traditional painting and mixed-media techniques. Over the past decade, Laporte has painted in Canada, Spain, Mexico, the United States, and India and developed a distinct style that’s become a familiar feature of Ottawa’s urban environment. Laporte’s painting has always been inspired by his direct surroundings and his murals allow him to reach audiences who may not frequent art galleries. He’s produced large-scale murals commissioned by Canada’s Museum of Science & Technology, Beau's Brewery, The Toronto Raptors, BMO, OSICO (Ottawa Community Immigrant Services Organization), Adidas, The Canadian Medical Association, the City of Ottawa Light Rail Transit Project, among many others. He’s also a regular participant in public art events, like Art Battle Canada where he was awarded “Ottawa’s fastest painter” in 2017. For the past four years, he’s coordinated the “Art Chaos Block” for Ottawa’s annual Glow Fair Festival, a visual arts festival that occupies several blocks in Ottawa's downtown core and includes dozens of visual artists from Ottawa and the surrounding region.

Laporte’s passion for community-based and accessible art forms compliments his background in traditional painting. He has exhibited his work in solo, collaborative, and group exhibitions for over ten years, with shows in Ottawa, Toronto, Vancouver, and Barcelona. As a graduate of Sheridan College’s Bachelor of Illustration, he was awarded first place in the James Lee Foundation’s annual National Art and Design Competition.

Laporte’s recent work is as much a stylistic development as it is a reinvention of his aesthetic and thematic concerns. After years of exploring portraiture’s unique ability to capture the diversity of human emotion and experience, his new paintings turn to natural environments and the symbiotic connections between species and ecosystems. Laporte’s style combines realism and surrealism to encourage us to think about our relationship and responsibility to other species despite our different needs and inevitable gaps in understanding.

In thirteen large-scale paintings (spray paint and acrylic on canvas), Laporte depicts flora and fauna in ways that explore the mutual dependency of species. For example, his painting of the honeyguide bird combines the textures of feather, beeswax, and zebrawood leaf to capture the ways a single species is entangled with other members of their ecosystem. For centuries, the Yao community in Mozambique has relied on the honeyguide to lead them to wild beehives. The honeyguide knows how to find the hives, but has difficulty harvesting the beeswax. Once the Yao have harvested the hives, the bird eats the beeswax left behind by its collaborators. The honeyguide bird is an uncommon example of interspecies collaboration that makes us consider the ways our own behavior affects co-inhabitants of our ecosystems and the planet.