Note: This poll is now closed.

Are you a member of The Beaches community? Please provide feedback about the design proposal you prefer, by Monday, May 20th.

All three designs depict activities around the Beaches neighborhood with a focus on a healthy active lifestyle. All three reference the grocery store as the heart of the neighborhood shown in the image of the young family enjoying a picnic on the beach with a Foodland grocery bag in the foreground. This not only shows the Foodland line of products as part of the Beaches lifestyle, but the Foodland logo on the grocery bag with the “Better food for all” slogan can also be used as the logo signature in the mural.

The individual descriptions of the designs are as follows:

This design uses a realistic scenic approach. It references the Jazz Festival with the couple dancing in front of the Kew Gardens Gazebo where concerts are held on the left. Other landmarks are the Leuty Lifeguard Station and the boardwalk with a view of the Toronto skyline. The gentleman sitting with his daughter on the right will be shown holding two ice cream cones. The interactive element in this mural is the dandelion with its seeds blowing in the wind before transforming into the Victoria Day fireworks display over Ashbridges Bay.

This design uses a semi abstract approach. It uses stylized rendering s of the unique house facades along Woodbine Avenue as a decorative element which ties the composition together. It also shows the boardwalk from its east and west perspective. The interactive element in this design are again the dandelion seeds blowing across the mural to show the changing of the seasons. People can take pictures of themselves blowing on the dandelion flower.

This design makes use of a more abstract approach. It depicts more local landmarks such as the exterior and interior of the historic R.C. Harris Water Treatment Plant, the Leuty Lifeguard Station and the Kew Gardens Gazebo. Here the Jazz Festival is referenced by the figures playing music and dancing in front of the gazebo. The boardwalk and the Toronto skyline is depicted to the right. The interactive element in the mural is the little girl running with a kite which then turns into a pattern of kites decorating the top left of the mural. One of the kites will have a string leading to the bottom where people may photograph themselves holding the kite string next to the little girl. 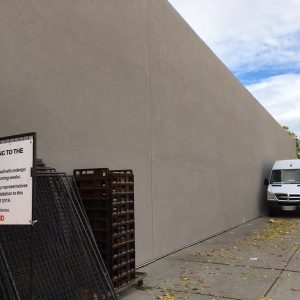 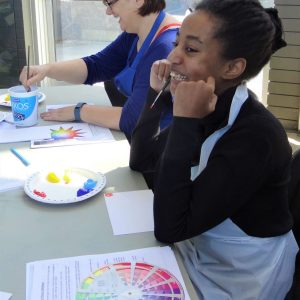 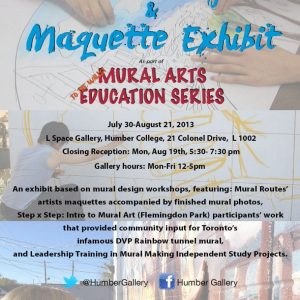 TO THE WALLS! Exhibit