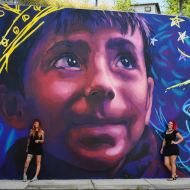 Originally hailing from Alberta Canada and based out of Montreal, we are a creative female duo that has collaborated professionally in monumental public art for over a decade. We first met in 2007 studying Fine Art at Grant MacEwan University, where our dedication to artistic practice forged an inseparable friendship. We have both graduated with Great Distinction in Montreal from the Concordia University Fine Art program in 2016 while completing an international exchange abroad in France at the L’École d’Enseignement Supérieur d’Art de Bordeaux. Working exclusively as a synchronized duo, we have produced well over 60 murals all across Canada and internationally in Iceland, Honduras, France, and Northern Uganda where we volunteered with an orphanage and an art centre for the reintegration of former child soldiers.

In all of our largest public projects, we have worked tirelessly to build meaningful connections with local communities to develop site-specific murals that positively reflect both the interests of their community, local history and utilize effectively the unique architecture of each site. ​In 2017 we were awarded one of five massive farm silos to paint for Popsilo’s, a Canada 150 celebration project to encourage tourism in rural areas. For our design, we consulted with local Algonquin community members to create an over 4,000 square foot mural representing themes of reconciliation and symbols of unity and hope for the future of Canada. In 2016 we were awarded the prestigious contract of painting a mural outside the new Rogers Place Arena in Edmonton, where we collaborated with Boyle Street Community Services a community outreach centre to combat homelessness and poverty. We developed five portraits to represent the honest inner-city, highlighting real community members ranging from social workers, underrepresented youth, and the homeless. Upon completion, ​Pillars of the Community​ became a landmark for inner-city empowerment and a celebration of urban diversity, rekindling a sense of belonging during this intense urban remodelling.  In November of 2018, we developed and held an art workshop with elementary school children of The Mississaugas of the New Credit First Nation for a future project that is to be created on unceded land near a historical Indigenous burial site in Toronto. In the summer of 2019, we were jury selected to participate in the Freezer Artist in Residency Program in Hellissandur, Iceland. During our month-long residency, we chose to paint the Icelandic ram, an animal which has played an essential role in the survival of the Icelandic people and their way of life. Our mural “Sauðfé” (Ram) is a monument celebrating the cultural importance of this nationally ubiquitous animal. This mural was painted on the largest wall in this forgotten fishing village and can be seen easily from the highway which now attracts buses, tourists and local visitors that would have otherwise passed this small town by.  “Sauðfé” has become a major local attraction and transformed the local economy as well as connecting tourists and locals to the beauty and allure of this unique place.

We believe strongly that to create art in the public realm, it is essential to engage with all local communities in order to create a work that truly resonates with the community, that represents the needs of the collective, and will be inherited by future generations.