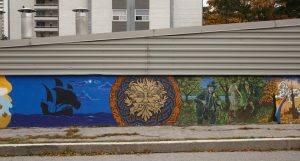 Happy St Patricks Day! From Michael Cavanaugh, project organizer and one of the mural artists who represented ancestral history and story in the 2015 ‘Neighbourhood of Nations’ mural in St James Town, Toronto:

Thinking today of my great-great-grandfather Neil Harkin who came to Canada from Ireland on a coffin ship in 1847. His brother Edward’s name is on the Irish Famine Memorial in Toronto harbour – he died that summer in a fever shed at the foot of Bathurst St. I was also thinking of them when I worked on the Neighbourhood of Nations mural last summer, so please indulge me this rather lengthy re-post from then:

“In Irish mythology and folklore, Tír na nÓg (“Land of the Young”) is one of the names for the Otherworld, or perhaps for a part of it. It is depicted as a supernatural realm of everlasting youth, beauty, health, abundance and joy. In the echtrae (adventure) and immram (voyage) tales, various Irish mythical heroes visit Tír na nÓg after a voyage or an invitation from one of its residents. They reach it by entering ancient burial mounds or caves, or by going under water or across the sea.” ~ Wikipedia

My panel of the mural represents the European settlers who have settled in and passed through east downtown Toronto, specifically the Irish immigrants and famine refugees who arrived in the middle of the 19th century.
The left section is a sailing ship, making the crossing to the New World. It is depicted sailing at night to create a slight sense of dread or foreboding: the Europeans will be bring a mixture of good and bad to the new land, and many are fleeing repression and suffering at home. Although historical, the subject is also as topical as today’s headlines.

The middle panel is herald-like, alluding to European cultures and traditions of the last millennium. The centre image is of The Green Man, commonly used as a decorative architectural ornament on buildings throughout Europe. The Green Man is surrounded by a circle of traditional Celtic design imagery of knots and curly, organic lines. This section is meant to represent man in harmony with nature and the positive aspects of European culture that nourished and sustained immigrants, particularly the Irish, upon their arrival.

The Irish theme is expanded on the right section of the panel, which depicts a fiddle player and a pair of dancers enjoying jigs and reels in a shady grove beside the Don River. This is meant as a celebration of the positive aspects of Irish culture and tradition: music, song, poetry, and the ability to have a good party, no matter how bad things may be.

My goal with my section of the mural is to remind people of the history of this area of town and to let the many newcomers in St James Town know they are just the latest in a long stream of immigrants and refugees who have arrived in the community seeking relief from suffering and hoping for a new life for themselves and their families.

Mural Routes Members Sharing: Want to share a mural or project you’ve worked on? Send a description of the project, with images, to membership@muralroutes.com